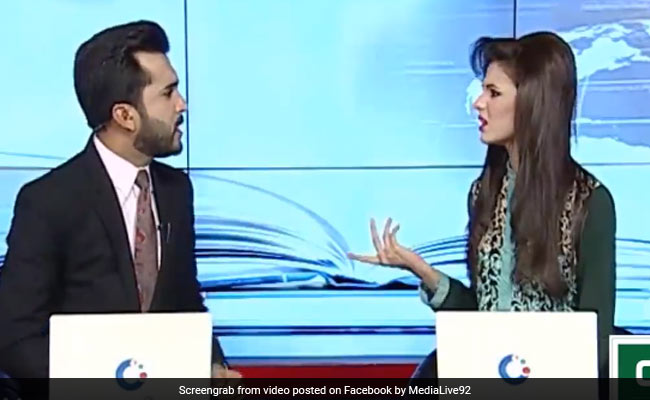 Two television news anchors from Pakistan were filmed having a verbal spat between takes and a leaked video of their fight has gone viral on social media. The anchors, reportedly from a Lahore-based news channel called City 42, are seen on camera having a bitter exchange, with one of the anchors complaining to the production crew about the other's behaviour.

"How am I supposed to do the news bulletin with her," grumbles the male anchor in Urdu as the video begins. "She's saying don't talk to me."

"I was talking about your tone," replies the female news anchor. "Speak to me with respect."

"How have I disrespected you?" asks the man, losing patience rapidly at this point.

"Jahil (ignorant)," the woman mutters under her breath - her barb clearly directed at her colleague.

"Tell her to watch what she says," the man says angrily. "Is all of this being recorded?"

"There's no end to her tantrums," he complains as the video ends.

The video, various versions of which are circulating online, has been watched and shared lakhs of times.


"Happens between colleagues. Am sure they had lunch or dinner soon after this," comments one optimistic person. "And then they lived happily ever after," jokes another.

Promoted
Listen to the latest songs, only on JioSaavn.com
This isn't the first time behind-the-scenes footage of a television news anchor has gone viral.

Last year, the host of MSNBC's 'Last Word' Lawrence O'Donnell was forced to apologise after footage leaked from the show's August 28 taping showed the anchor having a profanity-laced meltdown. The over eight-minute-long video was first leaked by media-watch website "Mediaite" and then reposted on several social media platforms. Click for more trending news