"How am I just finding out about this now?" wrote Padma Lakshmi while sharing the video. 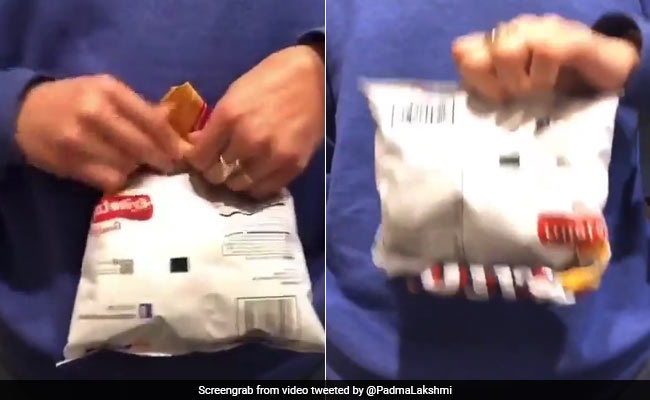 A viral hack shows viewers how to seal a bag of chips perfectly.

Sealing a bag of potato chips perfectly is no easy task. While many of us can finish a bag of potato chips in one sitting, there are others who like to save some for later - and invariably struggle to seal the bag again once it has been opened. It's no wonder, then, that a hack to seal a bag of chips without a clip of sealing device is going massively viral online.

The hack captured social media's attention when it was shared by chef and TV host Padma Lakshmi on Twitter. The video, which has now gone viral on the microblogging platform, was first shared by TikTok user Heidi Tuley, aka @shine.on.darlin.

In the video, a person is seen sealing a bag of chips flawlessly by folding both corners down and rolling them inwards.

"How am I just finding out about this now?" wrote Padma Lakshmi while sharing the video. Take a look at it below:

How am I just finding out about this now? pic.twitter.com/kOOWqRyQkN

Since being shared online three days ago, the video has collected over 11.3 million views and thousands of impressed comments, with many branding the viral trick "brilliant" and "great".

Took a few tries but it worked. pic.twitter.com/6VHubGmJfC

Heidi Tuley, who made the original video, told Today that she learned the trick from an acquaintance. "An acquaintance of mine in high school actually showed me how to fold a bag of chips this way when we were on a bus headed to a sporting event," she said. "I've been folding my bags of chips this way ever since and it blows people's minds every time."