Read inOther Languages
This Article is From Oct 15, 2020

"I've never wondered how a giraffe eats grass before, but this is majestic!" 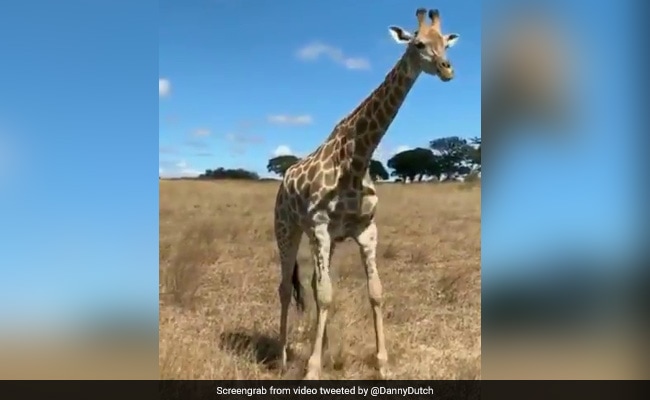 How does a giraffe eat grass on the ground? Watch this viral video to find out.

Years of evolution have given giraffes some very long necks, allowing them to reach higher branches which other herbivores cannot. But what is the animal to do when it wants to eat grass on the ground? A video that shows how giraffes 'bend' to reach grass has left millions of people laughing.

The video was shared online by Twitter user '@DannyDutch' and has gone massively viral on the microblogging platform. "I've never wondered how a giraffe eats grass before, but this is majestic!" he wrote while posting the video. In the short clip, a giraffe spreads its front two legs apart and bends its neck awkwardly to reach the grass. Having chomped down on a mouthful, it skips back to its standing position before repeating the whole process again. The sight is downright comical and is sure to make you laugh too.

I've never wondered how a Giraffe eats grass before, but this is majestic! pic.twitter.com/9pjbTugdKm

Since being posted on Twitter Monday, the seven-second clip has been viewed a whopping 9.6 million times- and counting. It has also garnered 2 lakh 'likes', and the comments section has been filled with pics, videos and GIFs of giraffes doing everyday things like eating, fighting and drinking water.

this is also how they drink water pic.twitter.com/697jk0tLCZ

And this is how giraffes fight: pic.twitter.com/OkXcFqyLH6

Giraffes are the tallest living terrestrial animals. Found only in Africa, they are known for their extremely tall necks and legs, and their towering height allows them to reach treetops that few other animals can. According to the National Geographic, their height also has a disadvantage - it's tough for giraffes to drink water, and they do it only about once a week.

Malala Yousafzai Graduates From Oxford. Here's What She Posted