"This is my favorite TikTok ever," wrote one person. 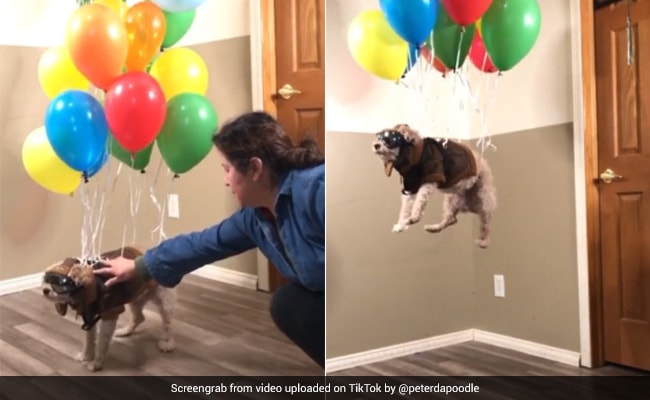 Peter the poodle's flying video has created a huge buzz on social media.

How many times have you seen a character on a TV show or movie floating away with helium balloons? Or crashing to earth when the balloons burst? Plenty of times, we bet, if you spent any time watching cartoons as a child. This well-known comedy trope - which up until now seemed confined only to animated cartoon characters - was recently recreated successfully in real life when one dog-owner tied a bunch of balloons to his adorable little poodle and watched him float up into the air.

The video, which has gone massively viral online, was first posted on the TikTok account dedicated to "Peter Da Poodle" on April 1.

The video shows the small pooch wearing safety goggles, with around two dozen colourful balloons tied to his back. The video shows a woman removing her hand from the dog's back, after which he begins to slowly rise up in the air as 'You would not believe your eyes' plays in the background.

Do you believe your eyes? ##dogsoftiktok##viral

♬ you would not believe your eyes - mr.mealtica

Since it was posted on TikTok, the video has collected a whopping 19 million views and more than 3 million 'likes' on the video sharing platform. It has also made its way to other social media platforms like Instagram and Twitter, where people can't stop gushing over the adventures of Peter the poodle.

One version of the video which was reposted on Twitter has collected 5 million views, along with thousands of amused comments.

I know Dogs can't wait for people to go back to work pic.twitter.com/ggLX6H6e75

"This is my favorite TikTok ever," wrote one person on the microblogging website.

"I laughed so hard I had tears streaming down my face," said another.

"Is this the new Up movie?" one Twitter user asked, referring to the Disney-Pixar movie where an old widower takes off on an adventure in his flying house.