One Thing That Scares Olympic Medallists? Find Out In This Rapid Fire Round 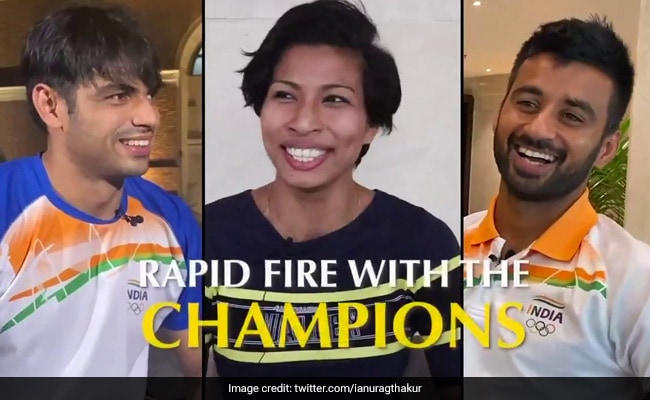 A rapid fire round with Neeraj Chopra, Lovlina Borgohain and Manpreet Singh

Sports Minister Anurag Thakur took to social media on Friday evening to share a video of a rapid fire question-and-answer session with three of India's Olympic medallists. In the candid rapid fire round, Neeraj Chopra, Lovlina Borgohain and Manpreet Singh answered some fun questions that were posed at them. From talking about their comfort food to revealing the one thing that scares them most, the three Olympic champions had viewers smiling with their responses.

Neeraj Chopra, 23, won a gold medal at the Tokyo Olympics - India's first gold in athletics and second individual gold medal overall. Manpreet Singh is the captain of the men's hockey team that won bronze at the Tokyo Olympics, ensuring a podium finish for India in its national sport after 41 years, while boxer Lovlina Borgohain also took home the bronze medal in the Tokyo Games.

In the video, the three athletes were asked what their comfort food is. For Manpreet Singh, the answer was butter chicken, while Lovlina Borgohain revealed she is partial to pork. Neeraj Chopra, meanwhile, said fruits - because "unka kuch nuksaan bhi nahi hota (they are not harmful)."

The discussion then moved on to the one thing that scares the athletes, and it was Manpreet Singh's answer that had us in splits. "Mummy se jhooth bolna (Lying to my mother)," he said, tongue firmly in cheek. The hockey captain added that he is still scared of getting beaten up by his mother. Ms Borgohain confessed she is afraid of heights, while Neeraj Chopra said nothing immediately came to his mind.

Watch the athletes answer this and much more in the video below:

A Candid Rapid Fire Round
with India's ???????? Olympic Medalists@Neeraj_chopra1@LovlinaBorgohai@manpreetpawar07

The video has racked up over 30,000 views within minutes of being posted on Twitter. Take a look at some of the reactions it has garnered:

"Became fan of Neeraj Chopra... how humble he is," wrote one Twitter user.

Became fan of @Neeraj_chopra1 of his character ???? how humble he is and he talks right from his heart ????

"This is sweet," another remarked.