"Once In A Lifetime" Sighting: Giant Deep-Sea Squid Carcass Washes Up On New Zealand Beach

Giant squids are the second-largest mollusc and they possess the largest eyes of any animal - at a whopping 10 inches in diameter. 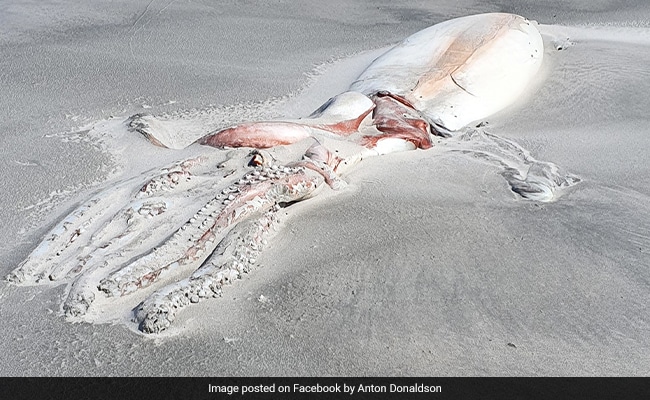 Tourists enjoyed a "once-in-a-lifetime opportunity" to witness the deep-sea creature.

A 13-foot-tall giant deep-sea squid carcass was recently found by a group of tourists on New Zealand's sandy coastlines. The creature was spotted on a Farwell Spit Tours trip in Golden Bay last week on Friday.

Tour guide Anton Donaldson shared images of the giant squid carcass on Facebook. In the caption, he wrote, "Our lucky passengers enjoyed a once-in-a-lifetime opportunity to witness one of the true mysteries of the deep."

"With three hearts, the largest eye in the animal kingdom and a parrot-like beak designed for ripping flesh - the Giant Squid is a Cephalopod to behold. This specimen was found on our Farewell Spit Tour on Friday," Mr Donaldson added in the post.

Since being shared, the pictures have left internet users amazed. One user wrote, "Damn that's a big squid." Another added, "I can almost smell it! Amazing creature!"

According to Newsweek, Mr Donaldson stated that the creature measured nearly 13 feet. "The tentacles on it were chewed back," he informed, adding that it looked as if some other sea creatures such as small sharks or fish had eaten it. "I imagine it had been floating out there for a period of time and had washed up," Mr Donaldson said.

"When it's something a bit different it's a special thing to experience. But at the same time, there was some sadness about a creature like that. A magnificent example of a large sea creature that lives at the bottom of the ocean unfortunately on the beach, not alive anymore," he added.

Giant squids are the second-largest mollusc and can grow to lengths of up to 43 feet long. They possess the largest eyes of any animal - at a whopping 10 inches in diameter. They are believed to be the common prey of sperm whales, pilot whales and killer whales. They are eaten by other giant squids as well.