Weatherman Snaps At Viewers During Tornado Warning. Here’s Why

"I'm sick and tired of people complaining about this," he said 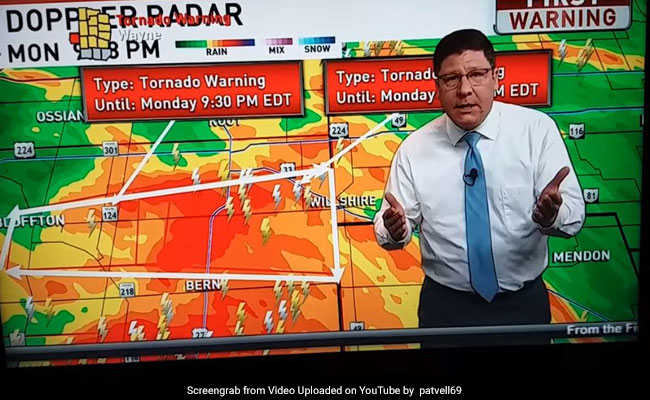 Jamie Simpson snapped at viewers during a tornado warning on Monday.

A weatherman for Fox 45 in Dayton, Ohio snapped at viewers who complained about a tornado warning interrupting Monday night's broadcast of 'The Bachelorette' - a hugely popular American reality TV show. Jamie Simpson, an Emmy-award winning meteorologist, broke into the reality show's broadcast to warn the people of Ohio of a tornado warning in their area, reports Esquire. When viewers complained on social media about the interruption, Mr Simpson was heard snapping at them during the live broadcast.

"I was just checking social media, we have viewers complaining already. 'Just go back to the show.' No, we're not going back to the show, folks. This is a dangerous situation, okay," he said.

He went on to scold 'The Bachelorette' viewers for caring more about the reality show than the threat of a tornado.

"Think about if this was your neighborhood. I'm sick and tired of people complaining about this," Mr Simpson said. "Our job here is to keep people safe, and that is what we're going to do. Some of you complained that this is all about my ego. Stop. It's not. I'm done with you people, I really am, this is pathetic."

Videos of Mr Simpson snapping at his viewers have gone massively viral online.

Though Fox 45 did not comment on the incident, Mr Simpson later apologised for his outburst. "Alright, I'm sorry I did that, it just really bothers me that we have people that don't care about other people's safety around here," he said.