"No they are not fighting," wrote Indian Forest Services officer Parveen Kaswan. 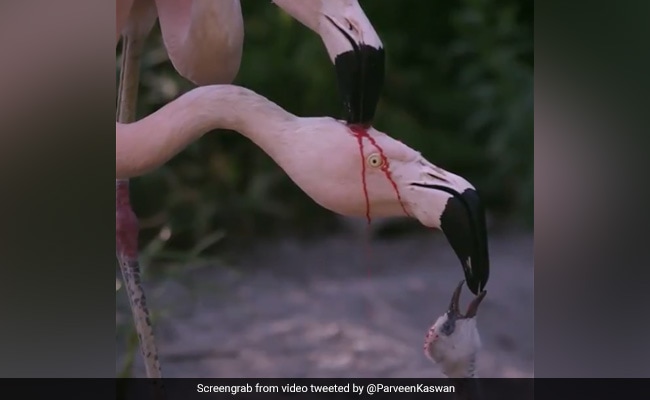 A video that appears to show two flamingos fighting was shared on Twitter.

Indian Forest Services officer Parveen Kaswan often shares wildlife photos and videos with informative tidbits on social media. This morning, Mr Kaswan took to Twitter to share an intriguing video that appears to show two flamingos fighting. In the video, one flamingo has its beak placed on the other bird's head, which appears to be covered in blood.

"No they are not fighting," Mr Kaswan clarified while sharing the video.

He explained that the two flamingos are actually feeding a chick, and the 'blood' or red liquid is actually crop milk. "Parent flamingos produce crop milk in their digestive tracts and regurgitate it to feed young ones," he wrote.

"This crop milk is made up of protein and fat-rich cells of the lining of crop, which is part of alimentary canal where food is stored before digestion. Which effectively means they are feeding their stomach before kids can start eating solid food," Mr Kaswan explained further.

Look closely at the bottom right hand corner of the video and you will see the chick feeding from the red crop milk:

No they are not fighting. This is one of the most amazing thing in nature. Parent flamingos produce crop milk in their digestive tracts & regurgitate it to feed young ones. See how together they are doing it. Source: Science Channel. pic.twitter.com/GrJr4irGox

According to Discover Wildlife, flamingos are among the few birds that can feed their young ones directly from a secretion produced in their crop - which is an expanded, muscular pouch near their throat.

Interestingly, flamingos get their distinctive pink colouring from carotenoid pigments found in their diet of algae and crustaceans. However, feeding their chicks crop milk during breeding season takes up so much carotenoid, that these birds are drained of their colour and their plumage appears almost white. The parents get their colour back once their chicks start eating on their own.

Mr Kaswan's flamingo video fascinated many, collecting over 35,000 views on the microblogging platform.

"The wonders of nature never fail to amaze us," wrote one person in the comments section. "This blew my mind. Amazing!" said another.

At the beginning of the month, Mr Kaswan had shared a video of a fight between a leopard and a monitor lizard that had quickly gone viral online.