Nicki Minaj claimed on Twitter that her cousin's friend became "impotent" after taking the vaccine. 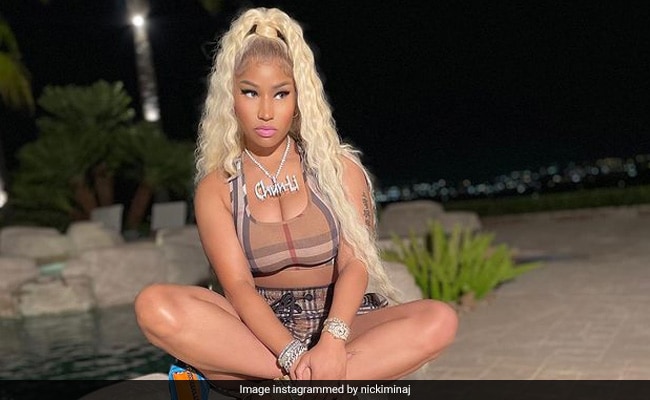 Rapper Nicki Minaj has been slammed for tweeting inaccurate information on Covid vaccines.

It has been quite a few months since the vaccines against COVID-19 were rolled out. Barring initial hesitation, people turned up in large numbers to get inoculated. This was as much a government effort as it was the responsibility of the civil society and the public at large. Many celebrities came forward to encourage people to take the jab, but in the middle of all this, there were some who remained skeptical about the vaccines. The latest to raise doubt about COVID-19 vaccines is rapper Nicki Minaj, and she is facing public backlash for tweeting what some people are calling “gossip” and “lies” that will cost lives. The Trinidad-born artiste said a friend of her cousin had become "impotent" after taking the COVID-19 jab.

She has more than 22 million followers on Twitter, where she made the claim, but has produced no proof to back it up.

"My cousin in Trinidad won't get the vaccine because his friend got it and became impotent," Nicki Minaj tweeted.

My cousin in Trinidad won't get the vaccine cuz his friend got it & became impotent. His testicles became swollen. His friend was weeks away from getting married, now the girl called off the wedding. So just pray on it & make sure you're comfortable with ur decision, not bullied

Recently, the rapper reportedly skipped the Met Gala — one of the most high-profile social events of the year — because she was not vaccinated. The event usually takes place in May, but had been postponed to September and mandated only vaccinated participants. In another tweet, the 10-time Grammy nominee told her fans she was avoiding public events because she has a new baby at home.

I have an infant with no nannies during COVID. who mad? Not risking his health to be seen. One yaself. https://t.co/z1uo2OHO1b

Her tweets have drawn the ire of many users who say her claims are not based on facts. One user said that people react to even ibuprofen but should not mean they stop taking painkillers, adding “gossip isn't research”.

girl, there's people out there who react to ibuprofen too but that doesn't mean people should stop taking painkillers. speak to actual experienced doctors and scientists instead of making your mind up based on things that have a 0.0001 chance of happening. gossip isn't research

Professor Whitty beefing with the ghastly @NICKIMINAJ (one of the rudest little madams I've ever met) is not the breaking news that I expected today - but it's most welcome. She's peddling lies that will cost lives.

American painter Brandon Bird said the rapper was popular enough to get personal expert advice but “instead you do this”.

You're famous enough to have any of the scientists give you a personal phone call answering every one of your questions and instead you do this.

Some others just trolled Minaj for propagating unverified reports.

I got the vaccine and my car battery was completely drained the next day after I left the headlights on all night.

Coincidence? I think not!

Several medical professionals, doctors, and world institutions have said that the certified vaccines against COVID-19 are safe.

Dr Arturo Casadevall, chair of molecular microbiology and immunology at the Johns Hopkins Bloomberg School of Public Health, told CNBC that the symptoms were "almost certainly" not caused by the vaacine.