Navratri 2017: It's Team India vs Team USA In A Dandiya Dance Off

To celebrate Navratri, the US Consulate in Mumbai hosted a dandiya dance off between its Indian and American staff and asked the Internet to help choose the winner. The results are in! 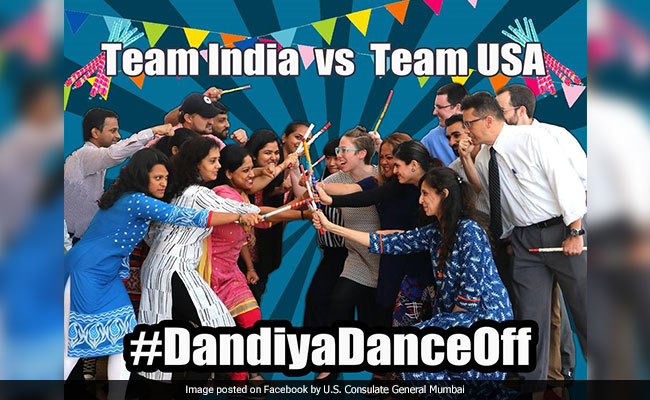 Happy Navratri: The festive season is instantly made more fun with a dandiya dance off

New Delhi: The festival of Navratri is one of the most widely celebrated Hindu festivals. The nine-day long festival is celebrated to honour Goddess Durga. Each day, one of her nine different forms is worshipped. Many fast and avoid food grains like rice, wheat and pulses for nine consecutive days. But Navratri, which began this year on September 21, is also popular for its vibrant garba and dandiya nights. Garba and dandiya are folk dances from Gujarat and Rajasthan that are traditionally played during Navratri. The US Consulate in Mumbai recently held a friendly dandiya dance off between its Indian and American staff. And what's more, the Internet helped pick the winner.

On social media, the US Consulate documented everything from the rehearsals to a trip to buy the perfect chaniya cholis (embroidered blouses, colourful lehengas and mirror-work dupattas) as well as kafni pyjamas, ghagras and pagadis.


Watch the dandiya dance off below:


The US Consulate asked the Internet to vote for their favourite team. The efforts of both Team India and Team USA impressed many on social media.

"Both the teams are fabulous. But I'll vote for team USA since it's their first time. They are simply fantastic," wrote one person.

"We must appreciate their efforts to match with our team. In my opinion, each one is winner," wrote another.

"Good performance by both teams but I think it was nice of the US team to try a new dance style absolutely alien to their styles and they were very gracious in the dance performance," commented a third.

But, there could be only one winner. And the results were announced on social media just 16 hours before writing this.

Find out who won the dandiya dance off:

Promoted
Listen to the latest songs, only on JioSaavn.com
Congratulations Team USA! And congratulations on a great effort Team India!

Team India or Team USA, who was your favourite? Let us know in the comments section below.Click for more trending news

Shark Tank India Season 2: Meet The Six Judges Who Will Hear The Pitches