"Nature At Her Most Incredible": Video Shows Thunderstorms Sweeping Over Grand Canyon In US 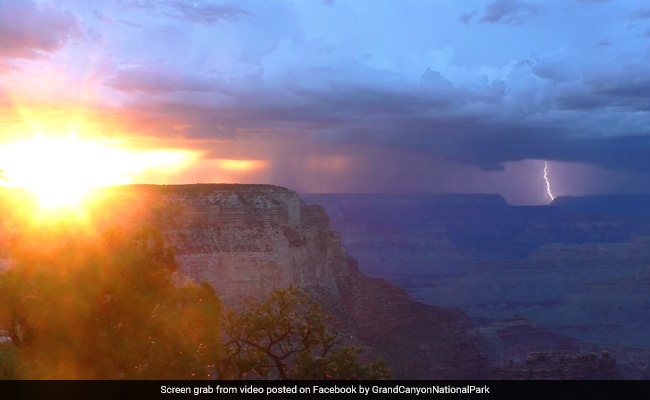 A dramatic video showing a thunderstorm sweeping the landscape of the Grand Canyon in the United States is gaining traction on social media. The clip was posted on Facebook by the National Park Service. It was captured near Yavapai Point, an area that provides some of the best views of the Grand Canyon's south rim.

"Thunderstorms sweep over the Canyon in the afternoon, dispensing heavy rain and violent lighting. If we are lucky, they depart just before sunset, the lingering clouds and distant lightning making for one of the most spectacular light displays on Earth," the caption of the post read.

In the video, streaks of lightning can be seen striking the landscape as heavy rain falls. Thunder can also be heard rumbling in the distance. At one moment, heavy clouds can also be seen dispersing, revealing a mesmerising sunset.

Shared on Wednesday, the video has accumulated nearly 5,000 views and hundreds of comments and likes.

"Nature at her most incredible," wrote one user in the comment section, while another said, "Seeing the Grand Canyon should be on EVERYBODY's bucket list. And if possible hike down to the bottom. This video is spectacular!"

A third Facebook user commented, "Awesome!! Beautiful God creation! Wish I was there!" A fourth added, "Incredible. I'll never forget watching the sunset over the Grand Canyon. Should be on everyone's bucket list."

In the caption of the post, the National Park Service said that this happens in the afternoon during the summer monsoon. Separately, according to Newsweek, the Grand Canyon National Park sees an average of 25,000 lightning strikes a year.