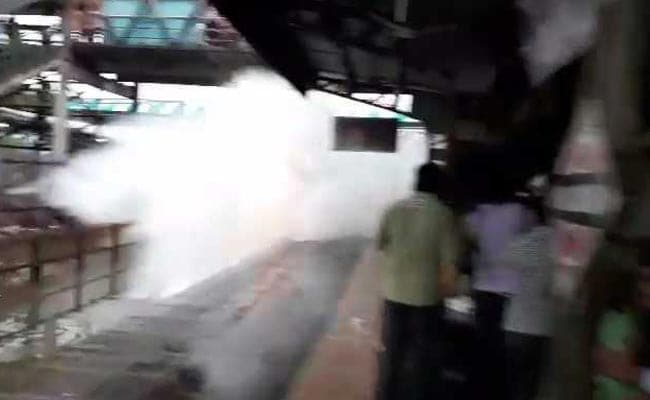 Mumbai rains: The video was taken at Nallasopara station on the outskirts of the city

Mumbai: A video of a train rushing past a flooded station has gone viral on social media. Filmed at Nallasopara Station on the outskirts of Mumbai, the train zooms past the station creating a burst of water from the tracks engulfing the entire platform and leaving unsuspecting commuters drenched.

Passengers ran for cover as the train entered the platform but miserably failed as the speeding train soaked them with muddy rain water giving them a forced shower that they didn't sign up for when they decided to take the train.

Trains in Mumbai have been moving at a slow speed because of heavy rainfall in the city. But this one left waiting passengers in shock as the train moved at high speed despite the tracks being covered in water.

Railway officials said if the track is clear trains can move at a certain speed even if the water is a few inches above the track. Officials also suggested that since the video was shot from a close distance it seems that the train is moving very fast but in reality it would have been moving at a speed much slower than what it appears in the video.

Promoted
Listen to the latest songs, only on JioSaavn.com
One version of the video has nearly 9 lakh views. Watch the video below: