A video shared by the Mumbai Police shows "The Great Khali" planning a motorcycle ride and walking out with a helmet, but he could not take a ride. 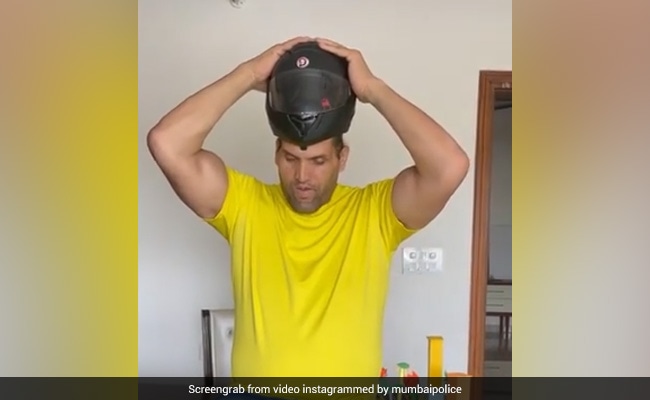 A new campaign ad of the Mumbai Police features 'the Great Khali'.

It should not be difficult to make people understand why wearing a helmet on a two-wheeler is a necessity. It is, however. For some strange reason, people find it liberating to violate laws that are made for their own safety. But law enforcers are determined too, to make people follow rules. In a new campaign ad, the Mumbai Police, known for its wit and easy-to-grasp messaging on social media, has featured the mighty Khali to ensure its message is loud and massive to those who violate traffic laws in the metropolitan area.

The video shows “The Great Khali”, who gained prominence for his vice grip on his opponents in the WWE ring, planning a motorcycle ride and walking out with a helmet. “We will go on a long ride… alright,” he says to the camera. Then he sits on a table and tries the helmet. This is what happened next.

It did not fit his head and Khali had to abandon his plans for an outing.

“The ‘Great Khali' knows that without a proper helmet, this ride can ‘khali' go so far,” said the Mumbai Police in the caption, playing on the 48-year-old professional wrestler's name. The message was written in Marathi as well.

Several people seemed to appreciate the approach of Mumbai Police as the post received more than 47,000 likes.

“Great message for us through The Great Khali. I appreciate this,” a user named Shyam Prakash Tiwari commented.

But some took the opportunity to point out that often Mumbai Police officials themselves are seen riding motorcycles without wearing a helmet.

“Unfortunately, Mumbai Police people are seen the most without helmets on bikes. Unfortunately, traffic rules don't apply to them,” said a person with the user name savage engineer.

This follower, Noor Mohammad, asked “The Great Khali” to throw the helmet towards the sky.