The letter, from 11-year-old Mahika Mishra, detailed a plan to curb honking 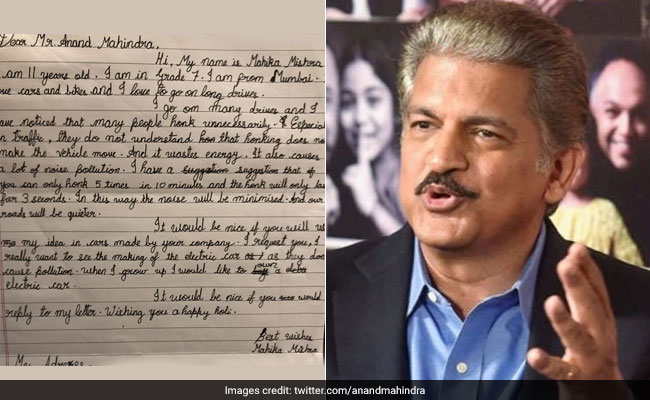 Business tycoon Anand Mahindra delighted his Twitter followers recently when he shared a letter he received from a Mumbai schoolgirl with an idea to reduce honking. The letter, from 11-year-old Mahika Mishra, detailed a plan to curb honking - and it impressed Mr Mahindra enough to share it with the world.

In her letter, Mahika wrote: "I go on many drives and I have noticed that many people honk unnecessarily - especially in traffic. They do not understand that honking does not make the vehicle move."

She added the other disadvantages of honking - wasting energy and creating noise pollution - before explaining her idea.

Mahika asked Mr Mahindra to implement a horn in all the cars produced by his company that could only honk five times in 10 minutes, with each honk lasting only three seconds.

"In this way the noise will be minimised and our roads will be quieter," she explained.

Mr Mahindra, chairman of the Mahindra Group whose Mahindra & Mahindra is one of the largest vehicle manufacturers by production in India, was obviously delighted by the letter.

Sharing a picture of the letter on Twitter, he wrote: "At the end of a tiring day, when you see something like this in the mail..the weariness vanishes...I know I'm working for people like her, who want a better-and quieter world!"

At the end of a tiring day, when you see something like this in the mail..the weariness vanishes...I know I'm working for people like her, who want a better—and quieter world! ???? pic.twitter.com/lXsGLcrqlf

Since being shared online two days ago, his tweet has collected over 14,000 'likes' and hundreds of responses praising Mahika's suggestion.

Sometimes children to come up with brilliant ideas...please implement the idea Sir

This is a fantastic idea and thought. I think changemakers like you need to seriously consider implementing this

What do you think of the letter? Let us know using the comments section below.