"This mother deserves the catch of the match award," wrote one commenter on the viral video 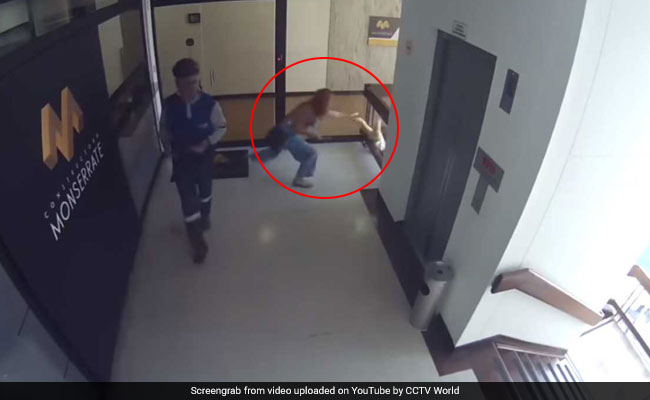 A mother managed to grab her son's ankle just as he is about to fall down four floors.

A mother was caught on camera saving her son's life with her lightning-quick reflexes. The video, which has gone viral online, shows the woman rushing to grab her son's leg just as he is about to fall down four floors. CCTV footage from the incident, which occurred last Wednesday in Medellin, Colombia according to El Espactador, shows the mother and child exiting an elevator. Then, as the mum browses her phone, the toddler approaches a railing with guardrails missing and loses his balance, almost falling through them.

However, in a split second, the mum darts forward and grabs him by the ankle, just in the nick of time. She even manages to keep her phone aside carefully after grabbing her son and pulling him back to safety.

Watch the incredible video below:

Since being shared online, the video has been re-shared and watched thousands of times. While many have praised the mum's quick thinking, others have criticised the building for not having guardrails.

"Only a mother can do it, salute to this brave lady," wrote one commenter on YouTube. "This mother deserves the catch of the match award," said another.

According to Daily Mail, the building management later placed a cardboard box in front of the guardrail hole and surrounded the metal bars with tape. The toddler, luckily, managed to escape without any injuries.

"Nothing happened to the child, he did not have any type of injury, fortunately," said building manager Juan Franco. "You have to credit the instinct of this mother, how she manages to protect her son."