Moonwalker Buzz Aldrin Shares A "View Of Home", Taken From Space In 1969

"This view of home never gets old," wrote Dr Buzz Aldrin, more than half a century after his historic voyage to the moon. 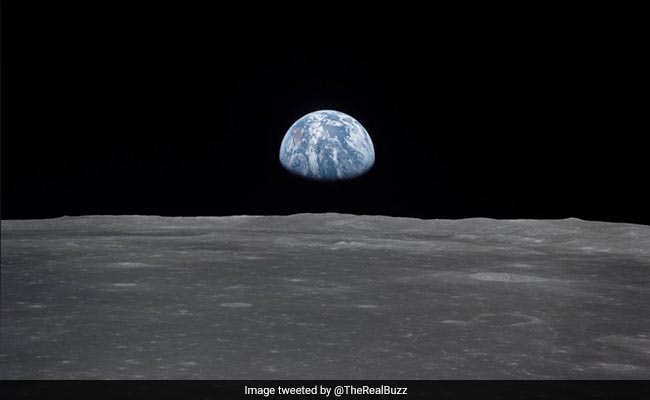 A view of Earth in a picture taken from space during the Apollo 11 mission.

Buzz Aldrin has shared a throwback picture like no other on social media. The second human ever to step on the moon took to Twitter on Thursday to share a stunning shot of Earth rising above the moon's horizon. The picture was taken during the Apollo 11 mission in 1969. "This view of home never gets old," wrote Dr Aldrin, more than half a century after his historic voyage to the moon with Neil Armstrong and Mike Collins. He also added the hashtags #ThrowbackThursday and #Apollo11.

Apollo 11 was the first spaceflight to land humans on the moon as part of NASA's Apollo programme. Commander Neil Armstrong and lunar module pilot Buzz Aldrin were the first two people to land on the moon, while astronaut Michael Collins flew the Apollo 11 command module Columbia around the moon.

According to NASA's website, the picture was taken on July 20, 1969 from the Apollo 11 spacecraft. The lunar terrain pictured is in the area of Smyth's Sea on the nearside.

This view of home never gets old. #Apollo11#ThrowbackThursdaypic.twitter.com/be6R1mvDba

The picture has collected over 13,000 'likes' along with several comments.

"I cannot imagine what that was like in person," wrote one person.

"What do you do after you have walked on the moon? Seriously, what goals do you set?" another asked.

Last year, Dr Aldrin had recalled moments of his journey to the moon, saying that he and his crewmates were so absorbed in doing their jobs that they were oddly disconnected from how momentous the occasion was as it unfolded for hundreds of millions of people on Earth, watching it all on live television.

"I sometimes think the three of us missed 'the big event'," Aldrin said during a 50th anniversary gala at the Ronald Reagan Library outside Los Angeles. "While we were out there on the moon, the world was growing closer together, right here."

Describing the experience of being on the moon, he said: "We had gotten there, and it looked pretty desolate. But it was magnificent desolation. I think Neil remarked the beauty, too."