A burnout is the practice of keeping a vehicle stationary and spinning its wheels. 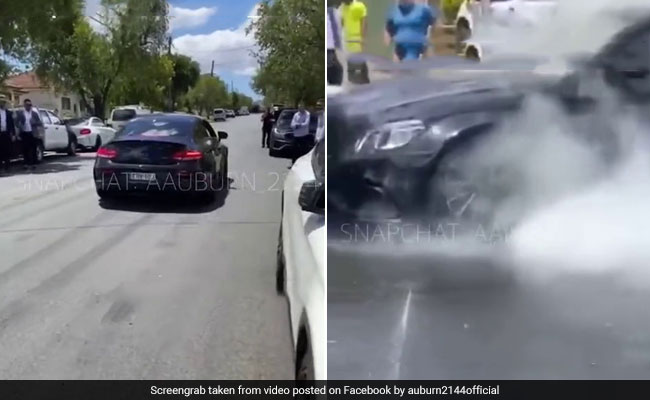 A Mercedes caught fire in Australia in a burnout attempt gone wrong.

The driver of a Mercedes has been charged after an attempt to perform burnouts ended with his luxury vehicle bursting into flames. The 25-year-old from Australia was revving his Mercedes Benz in front of a crowd of onlookers when smoke began to billow from the exhaust, sending him and his co-passenger into a panic as they scrambled to exit the vehicle.

Luckily, the two managed to escape the car without any injuries, reports the Daily Mail.

Their Mercedes-AMG C63 Coupe wasn't as lucky. Footage that has gone viral on social media shows the car catching fire in front of dozens of bystanders watching in shock. The luxury car reportedly costs a whopping $1,70,000 (approximately Rs 1.2 crore).

A burnout is the practice of keeping a vehicle stationary and spinning its wheels. According to Car Advice, the burnout attempt probably ended in disaster due to a suspected overheating transmission.

Emergency crews were called to Chester Hill, in Sydney's western suburbs, on Sunday, as the car went up in flames.

"A man has been charged after his luxury car was destroyed by fire in a Chester Hill street at the weekend," police revealed in a Facebook post.

The unnamed driver initially attempted to lie his way out of the predicament, saying that his car had caught fire while he was driving down the road. He might have gotten away with it too, had the fire not scorched the road too.

Unfortunately for him, there were dozens of eyewitnesses and as police investigated further, they realised that the Mercedes had caught fire because of a burnout gone wrong.

The man has now been charged with dangerous and negligent driving and asked to appear in a local court.