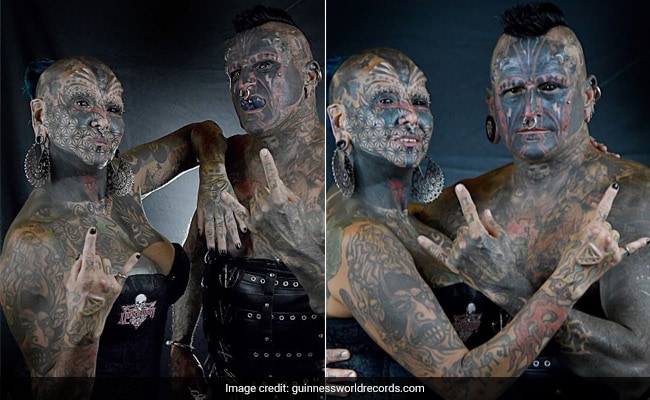 For the couple, body modifications are the greatest symbol of artistic expression and freedom

A couple from Argentina, Gabriela Peralta and Victor Hugo Peralta has set the Guinness World Record for the most body modifications. The married couple is passionate about tattoos and body modifications and so far they have about 98 of them.

Victor Hugo Peralta told Guinness World Records, "Enjoy life, enjoy the art. Tattoos don't make you a good or bad person - it's just art. There will be those who appreciate it and others who don't."

Gabriela and Victor met in Buenos Aires, Argentina approximately 24 years ago at a motorcycle event, an event that would change their lives, according to a news release by Guinness World Records.

It was love at first sight. From that moment on, they knew they would share the rest of their lives pursuing their passion for implants and body modifications, some of which, they admit, is very painful.

For the couple, body modifications are the greatest symbol of artistic expression and freedom.

The most painful modifications for Gabriela have been the scarifications; she has three and says the sensation is incomparable to any other modification. For Victor, the most painful experience was the pigmentation of his tongue, which caused difficulty breathing for hours. It was all worth it in the end, though, as it is one of his favourite modifications.

Their love of body art motivates them to make more modifications to their body.