Meet Ruby, The Dog Who Loves Petting Other Dogs. Video Will Make Your Day 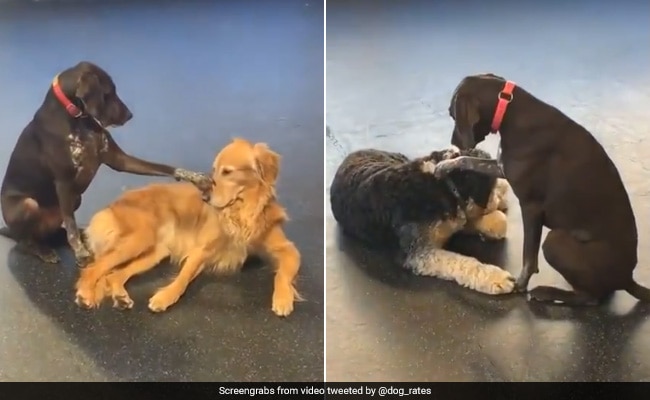 Ruby likes to pet other dogs at her daycare.

Ruby the German shorthaired pointer is a very friendly dog - and the world loves her for it. A heartwarming video that is going massively viral online shows Ruby petting other dogs at her doggy daycare, and it has everyone going "aww".

According to Daily Star, the video was first shared on TikTok by Ruby's human, Alanah Lorraine of Ontario, Canada. The video, which Alanah captioned "Ruby always trying to make friends!", became a viral hit after it was reposted to Twitter by popular account 'We Rate Dogs'.

One clip in the video shows Ruby patting a golden retriever. Another shows her with her paw placed gently on a dog's back, while a third clip features Ruby petting yet another furry friend. If you want to watch something wholesome and heartwarming, watch this video. It will make your day:

This is Ruby. She likes to pet the other dogs at daycare. 14/10 extremely relatable pic.twitter.com/5KgOnL5kwW

Since being posted two days ago, the collection of short clips has been viewed over 7.4 million times on the microblogging platform. It has also collected over 4.5 lakh 'likes' and nearly 90,000 'retweets'. In the comments section, many have professed their undying love for Ruby, while others have jokingly scolded her for not practicing social distancing.

Not even being dramatic, but I would die for ruby. https://t.co/9MhXS4cfD4

Ruby first rule of social distancing is keep your hands to yourself. Naughty, naughty.

Some Twitter users shared adorable videos of their own affectionate pets:

This is Sadie.
She likes to pet humans. pic.twitter.com/xP5wKkT3b6

This is Taco. We adopted my brother's cat. Taco likes to pet the cat. pic.twitter.com/VwMhA0hNhk

What do you think of Ruby's social skills? Let us know using the comments section.