No injuries were reported in the collapse 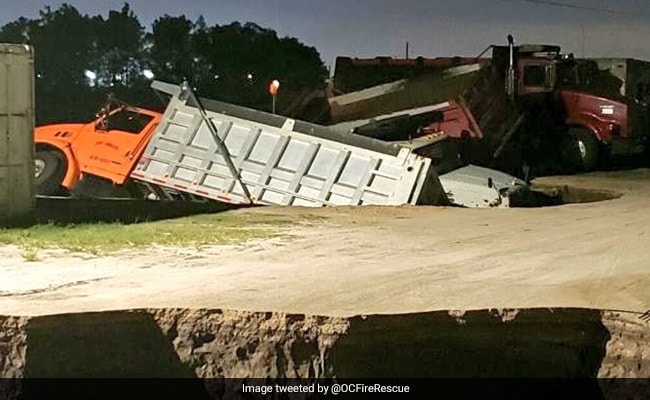 Authorities in Florida said multiple trucks were swallowed up by a pair of holes that opened up near the Orlando International Airport early on Wednesday. According to Spectrum News 13, the watery holes swallowed more than half a dozen large construction vehicles, including several trucks and canisters.

As of late Wednesday morning, officials hadn't determined whether the holes were actual sinkholes or a depression caused by something else, reports Spectrum News 13. Investigators are still trying to figure out why the ground collapsed at the property of C&A Trucking.

No injuries were reported in the collapse. Sharing pictures from the site of the holes, Orange County Fire Rescue said that trucks were swallowed by a hole in the road, and one driver managed to get out without any injuries.

Overnight: 11762 Boggy Creek Rd. Trucks swallowed by hole in the road. No injuries, driver got out. Engine 73 responded. @965traffic@TrooperSteve_@RAsaWFTV@MyNews13Traffic@WESHTraffic@JaclynDeAug@Fox35Newspic.twitter.com/iourU2QIMS

They added that a man who stayed on a mobile home on the property also escaped without any harm.

#UPDATE several trucks were swallowed by the hole, there was one man who stays in a mobile home on the property - he was not injured. The trucks are all on private property at the site. pic.twitter.com/aytxRdupuX

According to Click Orlando, the owner of the trucking  business said the draining of a lake on a nearby property might be what led to the ground collapsing. Crews will begin trying to get the trucks out after the ground settles.

A huge, mud-flinging geyser recently opened up in a homeowner's backyard in Rotorua, New Zealand, forcing the family to flee their house.