The video that was initially shared on TikTok soon went viral on social media platforms. 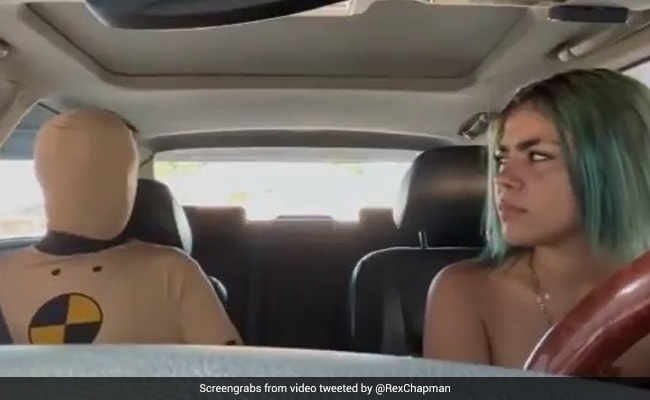 Screengrab from a video shared on Twitter by Rex Chapman.

While many of us may be dismissive of ‘dad jokes', there are some fathers who are adept at cracking hilarious jokes that often have their children at the receiving end of the punchline. And these jokes, while not very enjoyable to the children themselves, are quite a laugh riot among the onlookers. Internet users saw a hilarious example of this in a recent video that has gone viral on social media. The video shared initially on TikTok features a woman all set to take her father on her first drive in a car. The moment, which had the potential to be all things emotional and heart-warming, took an unexpected turn when the father turned up in a crash-test dummy suit.

The visibly annoyed daughter stares at her dad for some time before turning the vehicle off and leaving in a huff. She even adds, “You play too much,” before stomping off. Sharing the video on Twitter, former American basketball player, Rex Chapman, wrote, “First time driving with dad and he dressed up like a crash-test dummy. Can't stop laughing…” Mr Chapman's post has been viewed over 1.1 million times in less than 24 hours and has also been widely shared. It has garnered over 50,000 likes since it was posted.

First time driving with dad and he dressed-up like a crash-test dummy. Can't stop laughing... pic.twitter.com/Zn4Cwx8quf

Twitter users loved the father's prank, with some viewers even describing him to be a “legend”.

One viewer said that the clip was absolutely “priceless”.

Author Harlin Coben was a tad bit disappointed that he did not come up with the joke first.

Gotta admit. I'm a little envious I didn't think of this first. #dadjokeshttps://t.co/aDepTj7yEl

Entrepreneur and author John Hope Bryant said, “I feel this way when some family members — cousins I have not heard from in years — show up for a ‘quick, short term loan,' and then add ‘don't worry, I'll get it right back to you..'”

I feel this way when so@e family members — cousins I have not heard from in YEARS — show up for a ‘quick, short term loan,' and the. add ‘don't worry, I'll get it right back to you..'

Several others shared their own experience of learning to drive from their parents.

My mom tried to teach me to drive stick shift and ended up hiring a professional race car driver so she didn't end up murdering me. ????

Take a look at the other reactions.

Every parent who has taught their kid how to drive is wondering: 'Why didn't I think of this?!!'

You just drop the dad joke mic ???? you win! https://t.co/yoVIxAhrXv

Some users even felt sympathetic towards the daughter. However, it was soon revealed that the video, while hilarious, was scripted. Twitter users also dug up a bloopers reel of the clip that was equally funny.

It's pretty funny, but I think he owes his girl an apology... and some words to boost her confidence after this stunt

Well scripted or not, tell us what you think of the ingenious dad joke.