Some Twitter users raised doubts about the authenticity of the video 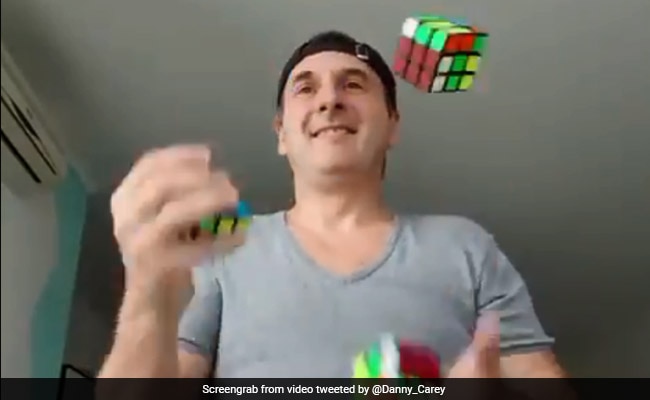 A viral video shows a man solving three Rubik's cubes while juggling them.

A video that will make you doubt your own eyes has gone viral online. The video, shared on Twitter, shows a man solving three Rubik's cubes - while simultaneously juggling them. The impressive feat was shared online by a Twitter user who goes by the name Theo. It has gone massively viral with over 7.4 million views on the microblogging website.

In the video, the unnamed man begins by showing three unsolved Rubik's cubes to the camera. He then begins to juggle them while solving them. As the video progresses, he manages to solve all three - never once stopping the juggling. Sounds near impossible? See for yourself:

All other rubik's cube achievements are cancelled pic.twitter.com/xEj7kBb8tc

The video has garnered more than 7.4 million views and hundreds of impressed comments on Twitter.

My entire life is a failure. I thought I was adequate, but then I watched this and realized that I am nothing.

However, many Twitter users raised doubts about the authenticity of the video. A number of people said that the man appeared to be throwing incomplete cubes out of the video frame and exchanging them for solved ones.

I can spot a few points where you get tossed a cube to somebody offscreen, but it's still a very impressive illusion

Others suggested that the video was played in reverse, which made it look like the man managed to solve the Rubik's cubes while juggling.

Nobody thinks it might be run in reverse? Even so, being able to alter those cubes while juggling just impossible???

What do you think is happening in this video? Let us know using the comments section.