The beluga whale is seen chasing and returning the rugby ball 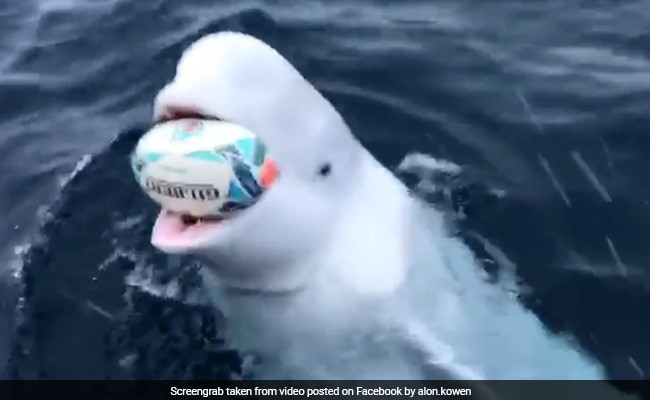 A beluga whale was seen playing fetch in a viral video.

A viral video has captured the incredible moment a beluga whale played 'fetch the ball' with a man on a boat. According to Metro News, the video was filmed near the Arctic Pole as a group of rugby fans used a ball to play fetch with the beluga whale. They were reportedly using an official 2019 Rugby World Cup ball for this unusual game.

New Zealand Herald reports that the video was taken by crew members aboard the Gemini Craft, which is currently at sea in the Arctic Pole.

The video begins with the beluga whale giving the ball to a man on the boat. The man then tosses the rugby ball back in water, and the friendly beluga whale is seen chasing it and returning it to him again.

SA coaches getting hired all over the place. pic.twitter.com/Y6KP18DVFz

Since being shared online one day ago, the video has collected over 4.1 million views on Twitter, along with a number of amazed and impressed comments. Another version of the same video, posted to Facebook, has also been viewed more than 1.3 million times.

"This will be the coolest thing I see all day. That is so great!" wrote one Twitter user in response to the video. "Man...this is one of the most beautiful videos I've seen," said another.

According to the National Geographic, beluga whales are highly social animals who employ a diversified language of clicks, whistles, and clangs to communicate.