Man In US Destroys Car at Disney World, Leaves Sorry Note and $100

Many users empathised with the user and provided solutions to help him with the same. 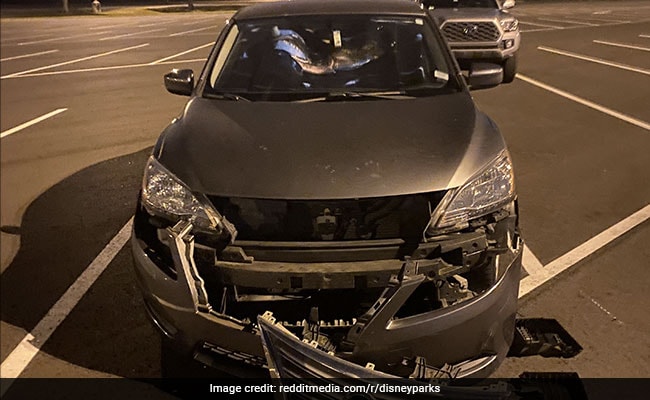 What would your reaction be after having a full day of enjoyment and then noticing your destroyed car? Anger, right? One such user shared such an unfortunate incident on the internet and posted a picture of his badly damaged car.

The now viral post was shared on Reddit. The car owner was enjoying a night out at Epcot, a theme park at the Walt Disney World Resort in Bay Lake, Florida watching the Hanson show when someone destroyed the vehicle, reported ESPN Southwest Florida. The person who caused so much trouble to the owner apologised by leaving a 'sorry note' and $100. The caption of his post reads, "Got out of Hanson at Eat to the Beat and found this in the parking lot with a note saying sorry and $100 but no information to help file a claim."

This post was shared five days ago and has garnered the attention of many. Many internet users empathised with the owner. A user suggested that the owner should check the security cameras. He wrote, "Ouch! Contact security, I bet they have cameras in the parking lots! Most places do. Good luck, that's a terrible way to end the day.

To which the owner replied, "We did contact security and filed a case with FHP but they didn't send anyone out because the vehicle wasn't occupied and is on private property. They said they have an investigator who may contact us but we'll probably only see footage if a case is pursued."

Another user commented, "I just can't get over someone writing a note apologizing but not giving their contact information. Not much of an apology!"

Also Read: Viral Image Of A 'Chewed Up' Suitcase Leaves Travellers Fearing For Their Luggage

"I have two theories as to why. The first is they didn't have insurance and so it won't help me anyway. The second is they had been drinking and don't want a DUI or something," responded the owner.

In another comment, the owner added, "Pretty sure their rear end caught the front as they were pulling out. The fasteners from the bumper were a good ten feet from the car, so I think they were going faster than they should have been. I think some inebriation was involved honestly."

He also mentioned that the insurance the claim has been filed and added, "The $100 is nice and all but I personally don't know anyone with a deductible that low. Wish they'd been a little more willing to accept responsibility."