"I honestly thought we'd get kicked off the plane," writes the grateful mum 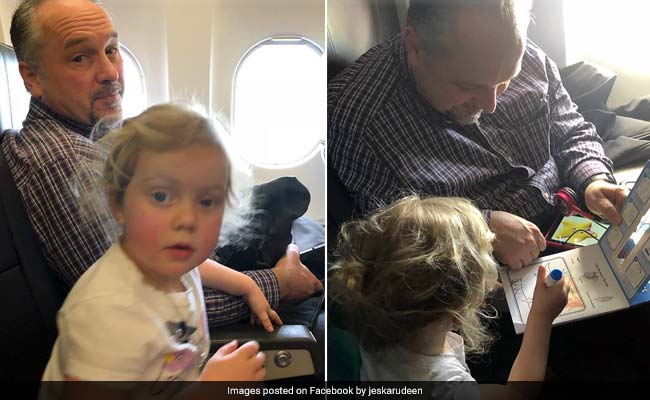 Todd colored and watched a movie with Caroline, writes her mother Jessica Rudeen.

As many  parents know, travelling with children comes with its own set of challenges, not the least of which is the perpetual worry of the kids "annoying" fellow-passengers. Jessica Rudeen, mother to three-year-old Caroline and four-month-old Alexander, found this out the hard way when she boarded a flight to North Carolina from Arkansas, USA. As her children began to panic and cry before the flight had even taken off, it was a stranger's kindness that saved the day for the harried mum.

Jessica's grateful Facebook post thanking the man who helped comfort her crying daughter and held her baby boy for her has now gone viral with almost 8,000 'shares' and a flood of comments.

In her post, Jessica writes that because she could not feed her four-month-old before boarding the flight, he began "screaming his head off." Meanwhile, her daughter Caroline lost her nerve about flying for the first time and also began to kicking and screaming.

"I honestly thought we'd get kicked off the plane," writes Jessica.

That's when the passenger sitting next to them reached out and held the baby while Jessica convinced Caroline to wear her seatbelt.

After that, he helped distract Caroline and played with her so Jessica could feed Alexander.

"During the flight, he colored and watched a movie with Caroline, he engaged in conversation and showed her all the things outside. By the end of the flight, he was Caroline's best friend. I'm not sure if he caught the kiss she landed on his shoulder while they were looking out the window."

"This guy, Todd, showed me kindness and compassion that I've never known from another person. His wife, he said, had a similar experience when their two boys were young and a stranger showed her the same kindness," writes Jessica.


In the end, Jessica wrote that she would love to connect with Todd again, and later posted an update to say that she has connected with his wife and they plan to meet up soon.

The post about the heartwarming incident has collected over 28,000 'likes' and has made many smile.

Promoted
Listen to the latest songs, only on JioSaavn.com
"Brought tears to my eyes, God sends people to you when you need them most. God bless you sir," writes one commenter.

"Love this story! I have 3 kids, and I know I've both been helped by strangers and helped strangers. Such a blessing. Open your heart and great things can happen!" says another.Click for more trending news