The fisherman said that the only reason he was able to catch the lobster was because of his small claws. 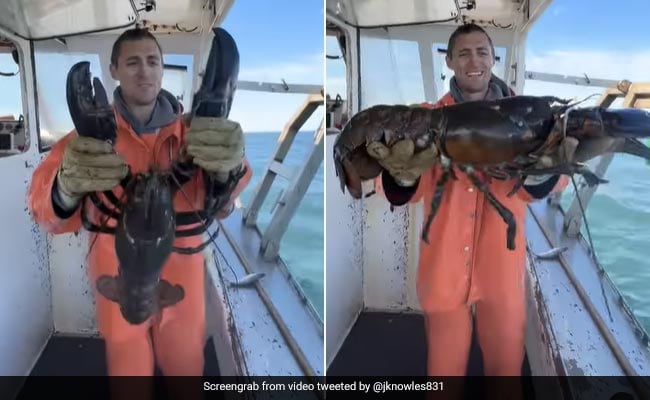 In Maine, lobsters this size are protected for breeding purposes.

A fisherman in the United States recently caught a lobster, which he claims is 100 years old, and probably captured by his ancestors too.

Taking to Instagram, Jacob Knowles shared footage of the gigantic lobster. In the clip, he said, "This is quite possibly the biggest lobster we've ever caught." The fisherman also held the lobster up to the camera, displaying its huge size.

Mr Knowles said that the only reason he was able to catch the lobster was because of his small claws. He explained that at some point in his life the lobster lost his claws and grew back some new ones. "So unfortunately his claws don't match his body but if you look at his body, it's very impressive," he said.

Further, Mr Knowles revealed that he is a fourth-generation fisherman. He said that it is quite possible that the 100-year-old lobster would have been caught by his family, who lead lives as fishermen before him.

Also Read | 4-Metre-Long Croc Was After His Son's Hat. The Man Didn't Even Flinch

According to Mr Knowles, it is possible that the lobster "migrate through the same area year after year." He also said that due to the lobster's old age, he no longer has any teeth on his claws, however, he added that overall the crustacean was "pretty healthy". "You can see he has a little bit of shell disease starting but overall he's in good shape....look at the size of his tail...it's the size of both of my hands," he said.

Mr Knowles had to throw the giant lobster back into the water because of its large size. According to Newsweek, in Maine, lobsters this size are protected for breeding purposes in order to ensure the population continues to thrive.