Patrick Cassidy said his laptop's screen shattered when the passenger in front of him decided to lean back. 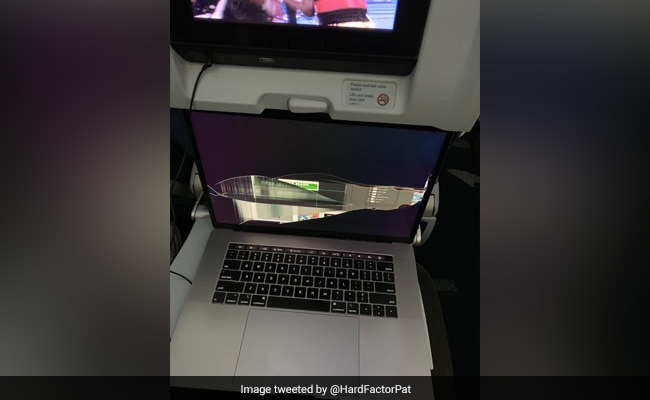 Patrick Cassidy shared a photo of his broken laptop on Twitter.

A Delta Airlines passenger was left fuming after his laptop was destroyed during a flight - when the person sitting in front of him reclined their seat. According to The Sun, Patrick Cassidy was flying with Delta from Austin to Los Angeles on Wednesday when the incident occurred.

The annoyed passenger took to Twitter to complain about the incident, saying that his laptop's screen shattered when the passenger in front of him decided to lean back.

"@Delta small note for the suggestion box, maybe have a little warning sign or someway to prevent my laptop from being destroyed when the person in front of me reclines their seat," wrote Mr Cassidy on the microblogging platform. He also shared a picture of his MacBook with half the screen shattered and black.

@Delta small note for the suggestion box, maybe have a little warning sign or someway to prevent my laptop from being destroyed when the person in front of me reclines their seat. pic.twitter.com/QHmphXiDhH

Mr Cassidy said that the flight attendant was unconcered after his livelihood was ruined by the reclining seat.

"I really appreciate that your flight attendant came over to tell me that the passenger in front of me 'needs to be able to recline' and then asked him 'if he was okay?' as if your seat hadn't just ruined my livelihood," he added.

Delta Airlines responded to Mr Cassidy's complaint by offering him 7,500 bonus miles and an explanation that left him fuming further. He shared a picture of the airline's email on Twitter, calling it an explanation that one would offer to a six-year-old.

Update: @Delta is giving me the equivalent of a $75 gift card and an explanation that you would give a six year old. Cool. pic.twitter.com/etGLUXOOjs

Mr Cassidy's case has divided opinion on social media. While some said that the person sitting in front was in the wrong, others faulted the laptop owner.

"The person needed to recline. If Macbooks are broken, chalk it up to collateral damage," wrote one Twitter user.

"Nobody should be allowed to recline on an airplane. It only causes issues," said another.

"It's your fault though for putting it in the area where the tray table is stored," a third remarked.