Making Music With Bottles And A Toy Train: Viral Video Will Leave You Amazed 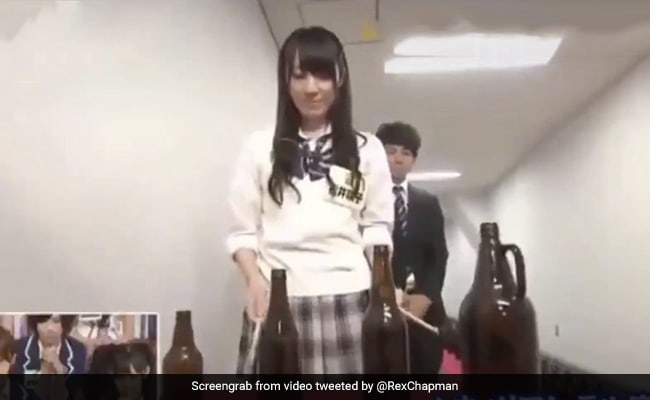 Watch how glass bottles and a toy train together create a beautiful melody.

In school, you may have done an experiment creating music with bottles. This woman takes the popular science experiment to a whole new level, creating a whole song using just glass bottles, a model train and two drumsticks.

The Scientific American explains that when it comes to creating music, a bottle functions as a "closed-end air column". Changing the level of water and air in a bottle also changes the pitch. When a bottle has more air, vibrations are slower and therefore, the pitch produced when the bottle is struck is lower.

A video that has resurfaced on Twitter and is going massively viral again shows a Japanese woman using the scientific principle to make music with the help of bottles of different shapes and sizes. The video begins with a woman using drumsticks to strike three different bottles, producing a simple but sweet melody. Then, her companion takes things up a notch. She attaches the sticks to a toy train in such a way that they strike a row of bottles placed on either side of the tracks as the train moves.

The resulting music will leave you spellbound.

The video was shared on Twitter by former American basketballer Rex Chapman. "Ok, this is amazing..." he wrote while sharing the clip.

Ok, this is amazing... pic.twitter.com/dObLm4I3zq

Since being posted on Wednesday, the video has garnered over 1.4 views and 25,000 'likes', along with hundreds of appreciative comments.

Man Uses JCB Excavator To Scratch His Back In Viral Video