Lucky Find: Bought For A Pound, Vase Once Belonged To A Chinese Emperor 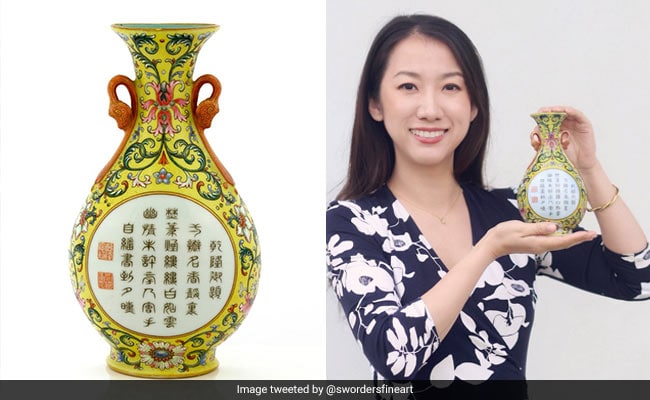 A picture of the vase, shared by Sworders Fine Art Auctioneers' on Twitter.

The unnamed buyer, who bought the vase at a charity shop, became aware of its value only when he listed it on eBay and was inundated with offers and bids. When he decided to withdraw it from the online auction and get it professionally appraised, he found out that it was a vase made specially for a Chinese emperor.

According to the Sun, the 8-inch vase once belonged to the Qianlong Emperor, who reigned from 1735 to 1796.

Sworders Fine Art Auctioneers' in Essex, UK, who appraised the vase, said in a statement that the 'Qianlong famille rose wall vase' is inscribed with a poem praising incense. It also bears two iron-red seal marks on the side which read Qianlong chen han ('the Qianlong Emperor's own mark') and Weijing weiyi (be precise, be undivided).

This Qianlong famille rose wall vase was bought from a charity shop for just £1, however it is expected to make over £50,000 in our November Asian Art Auction! But why is it so special? Read the full story - https://t.co/w8fPa1puQq#chinese#qianlong#charityshoppic.twitter.com/o83x4OZW3L

According to Ladbible, Yexue Li, who is the head of the Asian art department for Sworders, said that the anonymous buyer was shocked and excited when he found out about the vase's real worth.

"The gentleman vendor was in the charity shop and picked out the vase because he liked the look of it," she said. "He was unaware of his significance so he put it on eBay with a very low starting price to begin with and there was a lot of interest.

"He decided to take the vase off eBay and bought it in to us to take a look. He was shocked and very excited when we explained its importance."

There have been numerous instances of people discovering priceless works of art in the most unexpected of places. Last year, a painting bought at a thrift store for 75 euros turned out to be a Johan Aarts original that sold for over 30,000 euros. Before that, a 400-year-old painting, discovered buried at the bottom of a closet, turned out to be a work of Dutch painter Otto van Veen worth millions of dollars.