Mumbai's Goregaon East, flanked by Aarey Colony and Film City, is known to be frequented by wild animals and leopard movements are often caught on CCTV cameras. 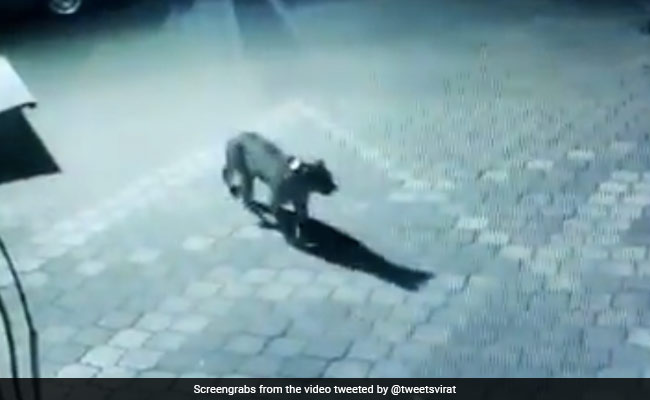 Video shows a leopard walking inside a gated colony in Mumbai.

A video of a leopard roaming in Goregaon East, Mumbai, has surfaced online, causing panic among those living in the area. The video shows the leopard walking inside a gated colony and then sitting right in front of the iron gate. After some time, the animal suddenly stands up and starts walking towards a blind spot.

The forest department has been able to identify the leopard from the CCTV footage. The officials have assured residents that they will conduct patrolling in the area. Awareness campaigns will also be carried out for the residents.

#leopard spotted in the CCTV footage of Gokuldham area in Goregaon East has been identified by the forest dept. The radio collar tht is clearly visible in this video was fitted in Nov last year. The occasional sightings of leopards is common in this neighborhood.@RoadsOfMumbaipic.twitter.com/BDb59DFU4q

Goregaon East, flanked by Aarey Colony and Film City, is known to be frequented by wild animals looking for easy prey in the form of stray dogs. Often, leopard movements are caught on CCTV cameras in these areas.

Another video of the incident shows a leopard passing across a gated building.

G Mallikarjuna, chief conservator of forests, Sanjay Gandhi National Park has asked locals not to panic and assured that the forest dept staff will conduct patrolling in the area and awareness sessions for local too will be carried out. @MNCDFbombay@mumbaimatterzpic.twitter.com/0gHYNXM944

A third clip shows the wild cat walking down what appears to be a vehicle parking area.

Flanked by Aarey colony, Film City these areas in Goregaon East are know to witness leopard movement often caught on CCTV cameras of bldgs. Leopards often come to these areas looking for quick and easy food in form of stray dogs. pic.twitter.com/dvguhMMYjd

While leopard sightings are common in these areas, sometimes they turn out to be dangerous. In September last year, a leopard had attacked an elderly woman in the Aarey locality. The woman fought off the animal with a stick and it ran away into the wild.

A few days later, a 14-year-old boy was wounded by a leopard in the same area. The boy was walking along a street at night when the animal attacked him. Hearing the boy screaming, his friends rushed to help and the leopard fled. The boy had suffered injuries on his neck, mouth and head. It was reportedly the eighth such attack in the area within a month.