The video shows a monkey jumping onto a deer for a short ride. 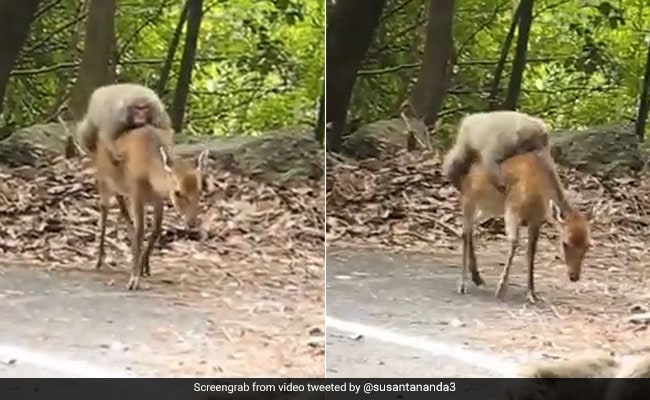 A monkey rides a deer in this hilarious video.

Maybe the monkey had a long day. Maybe he just didn't feel like walking for a change. Either way, when he saw the opportunity to hitch a ride, he jumped at it - quite literally. A hilarious video that is doing the rounds of social media shows a monkey jumping onto a deer's back for a short ride.

The video, which was shared on Twitter by Indian Forest Services officer Susanta Nanda, shows a group of monkeys sitting on the side of a road. One lazy monkey, sitting some distance away from his troop, finds an ingenious way to reach them by jumping onto the back of a passing deer. In the video, the monkey is seen making himself comfortable on the deer's back, not jumping off even as the deer stops to graze grass.

"Ohh dear it's a deer cab," quipped Mr Nanda while sharing the video on the microblogging platform on Monday. "Monkey takes a cool ride..." he added.

Since being shared online, the video has been viewed nearly 28,000 times. It has also collected 2,600 'likes' along with a ton of amused comments.

May all of us have one such ‘deer' friend in life who carries us around when we feel tired, or just want to be pampered :)

According to National Geographic, instances of monkeys hitching rides on deer have been noticed in the past by researchers. For example, Japanese macaques and sika deer hang out together in Japan's Yakushima island, where the primates have been spotted riding the deer.