The post was met with hilarious reactions. Since being shared, it has garnered more than 178,000 likes and over 29,000 retweets. 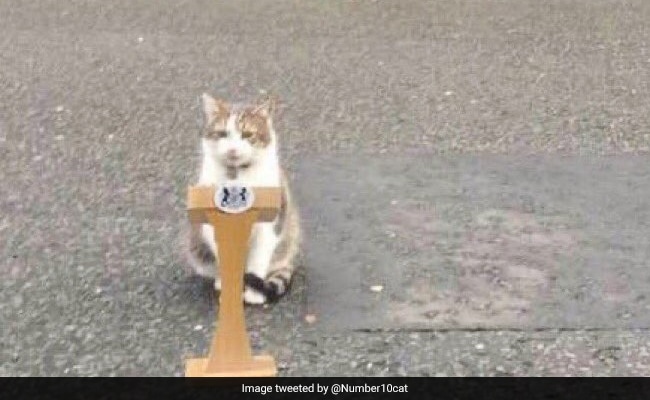 Despite a slew of resignations,the UK PM refused to quit.

“I can no longer, in good conscience, live with this Prime Minister. Either he goes, or I do,” the social media post read. The Cabinet Office's “Chief Mouser” also tweeted a picture of the feline standing in front of Downing Street with a photoshopped miniature podium.

“I can no longer, in good conscience, live with this Prime Minister. Either he goes, or I do” pic.twitter.com/6kYdvZshho

The post from the unofficial account was met with hilarious reactions. Since being shared, it has garnered more than 178,000 likes and over 29,000 retweets.

One user wrote, “Stay Larry, you can be the people's Prime Minister.” Another said, “you can't go Larry, you're the only one in number 10 that the people trust!” A third jokingly wrote, “You can't resign, you're the new PM”.

This comes after a series of resignations rocked Westminster. Boris Johnsons's finance and health secretaries quit on Tuesday, along with a number of ministers. According to reports, more than 20 members of the government resigned over the past 24 hours in protest over Mr Johnson's leadership.

Finance Minister Rishi Sunak and Health Secretary Sajid Javid said that they could no longer tolerate the culture of scandal that has stalked Mr Johnson for months, including lockdown lawbreaking in Downing Street that enraged the public who followed the Covid-19 rules.

However, on Wednesday, despite a slew of resignations, the UK PM refused to quit. The 58-year-old promised to deliver on his mandate. He said, “Frankly, the job of a prime minister in difficult circumstances when you have been handed a colossal mandate is to keep going and that's what I'm going to do."