Dr Nithin Narayanan said his sister taught him to write in a four-letter book, and he has followed it till now. 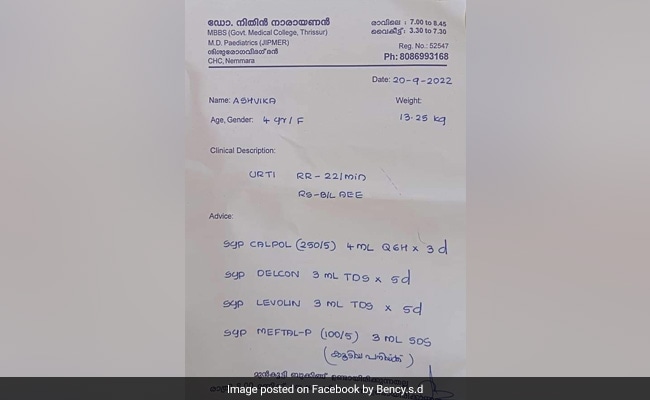 The prescription that is going viral has a handwriting that can be read by anyone, not just pharmacists.

Doctors are known for their incomprehensible handwriting, which is only understood by pharmacists. Several memes have been posted online that make fun of the doctors' prescriptions. But in recent days, photo of an exceptionally tidy prescription is gaining traction on social media. It has been written by Dr Nitin Narayanan from Kerala and can be read by any patient. The photo became famous after it was shared last week by Bency SD on Facebook, who said that the doctor works as a pediatrician at the Community Health Centre (CHC) in Palakkad.

The doctor wrote in block letters, which made the prescription extremely easy to read.

According to Mathrubhumi, Dr Narayanan has been working at the CHC for the last three years. He developed the skill of good handwriting in childhood.

"Copybook practices helped me and even after the completion of studies, I tried to maintain the writing style," he was quoted as saying by the outlet.

Speaking to Asianet, the doctor said "I write my prescriptions in block letters. The other doctors write illegibly because maybe they are busy. I try my best to write prescriptions legibly even when I'm busy. Patients often appreciate this."

Earlier this month, industrialist Anand Mahindra shared a short video showing how a doctor's handwriting progressively deteriorates over the years.

The 15-second clip with the title "Doctor's Handwriting be like" showed different levels of education. From class 10th to a specialist doctor, the video showed how the good, well-rounded handwriting of a school-going student gets worse by the time they become a specialist.