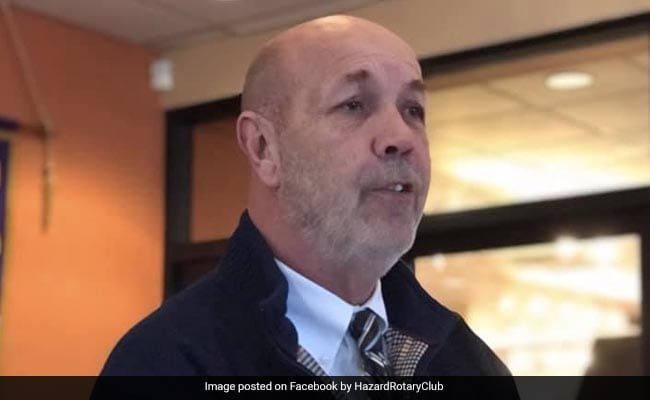 A Kentucky school principal is under investigation for photos that appear to show him and other teachers getting lap dances during a school event. Photos from a homecoming week event at Hazard High School have shocked the Internet. According to Daily Mail, the provocative photos came to light and captured national attention after they were shared on the school's Facebook page.

The photos - which have now been deleted from the school's page - show a teenaged male student giving lap dances to faculty members, including principal Donald 'Happy' Mobelini. More photos from the event appear to show students dressed as Hooters waitresses and carrying what looks like alcohol in the school gym.

"Um. Exactly what is going on here, y'all? C'mon Hazard," Nema Brewer, co-founder of education advocacy group KY 120 United, wrote on Twitter Tuesday, sharing screenshots of the photos that were taken down by Wednesday morning as outrage grew on social media.

The photos were taken during homecoming week events that began on Sunday at the school. The events included a "Man Pageant" and a "Costume Day". The pics have shocked social media. On Twitter, hundreds of people slammed the sexualisation of students and demanded strict action against school authorities.

Being the adult in the room means you would have stood up, shut off the music, and told the room that this was inappropriate… if adults didn't jump in and take responsibility for stopping it, then the authorities would need to be called.

As an educator for 30 years now, as a former public high school teacher, principal, VP Student Life for a State University, and as a teacher again now at a private and religious high school…and as a father of two wonderful daughters this is beyond immoral unethical. It's ugly.

I'm like… really bothered by this. I don't care about “tradition” or “not understanding the community” or “it's all in good fun.” It's wrong. Nobody in a position of authority in their right mind could possibly think this is ok. Guarantee there are students uncomfortable

"Public education is under so much fire right now. This kind of stuff is not helpful. In fact, it's disgusting. It appears they are sexualising young adults,"Ms Brewer told the Herald-Leader.

Hazard Independent Superintendent Sondra Combs on Wednesday confirmed that the district was investigating the photos.

Principal Donald 'Happy' Mobelini is also the mayor of Hazard. He has reportedly been investigated twice in the past for alcohol incidents involving students.