Miraculous Escape For 4 People After Helicopter Crashes In Field

The aircraft toppled while making an emergency landing. 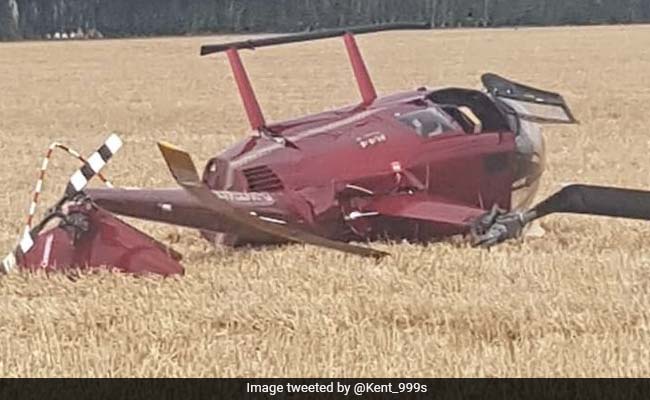 The helicopter was photographed lying in a field after the crash.

A helicopter, carrying four people, crashed in a field in the UK while attempting an emergency landing. Miraculously, none of the four passengers were seriously injured in the crash, reports Metro News.

Emergency services were called after the aircraft crashed near a busy road in Kent on Sunday. According to Kent Police, the pilot was forced to make an emergency landing that did not end well. The pilot and three passengers not only survived the impact of the crash, they were also lucky that the fuel tank did not explode during the accident - when the aircraft toppled while making the landing.

According to UK Aviation News, a spokesperson for Kent Police said "Kent Police was contacted at 10.05 am on Sunday, July 26 and notified that a helicopter had carried out an emergency landing in a field near Heart in Hand Road, Herne Bay."

Photos that have been widely shared on social media show the helicopter lying in a field after the crash.

HERNE BAY update: Luckily, the helicopter that crashed into a field did not catch fire when it made an emergency landing. Pic Facebook. pic.twitter.com/MGWt8ARvxy

One police officer said that everyone made it out "safe and well" but there were still concerns of a potential explosion from any remaining fuel.

The Kent Fire and Rescue Service also updated followers about the situation, writing that the scene had been brought under control.

Firefighters are currently on the scene of a #helicopter crash near #A299 Thanet Way and Heart In Hand Road, near #HerneBay. Thanks to everyone who has called this in, however the scene now under control and being dealt with by emergency services. pic.twitter.com/CXZU50UjHj

The Air Accidents Investigation Branch will now carry out an investigation to determine the cause of the crash.

Indonesian Dancers Wow The Internet With Their Recreation Of 'Bole Chudiyan'