"Is this tigress from Bandhavgarh smoking," wondered IFS Parveen Kaswan while sharing the video on Twitter. 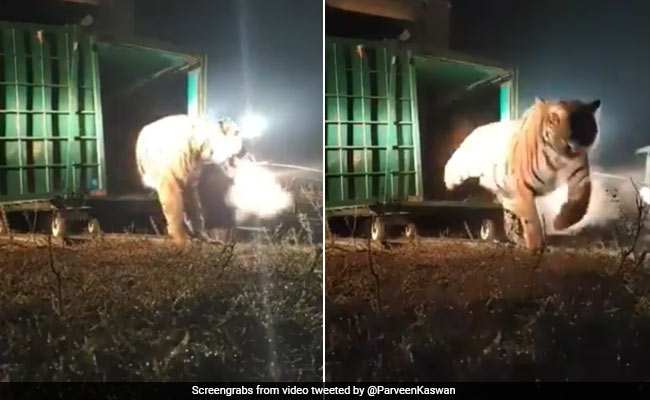 The tigress was rescued from a well by the forest department.

A video shared by Indian Forest Service officer Parveen Kaswan appears to show a tigress 'smoking'. Filmed at the Bandhavgarh Tiger Reserve of Madhya Pradesh, the 38-second clip shows the tigress sitting inside a parked vehicle. As it exits the vehicle, the tigress exhales a cloud of 'smoke'.

"Is this tigress from Bandhavgarh smoking," wondered Mr Kaswan while sharing the video on Twitter.

Of course, given that tigers can't smoke, it's safe to conclude that the cold of January had caused the animal's breath to condense, giving it a misty appearance.

Is this tigress from Bandhavgarh smoking. @BandhavgarhTig2pic.twitter.com/r8CWL6Mbwi

Since being posted on the microblogging platform one day ago, the video has been viewed over 28,000 times and collected a ton of reactions.

"How majestic it looks," another remarked.

In the comments section, Mr Kaswan also shared that the tigress had fallen into a well and was rescued by forest department officials last week.

"This videos showcases brilliant work done by Forest department staff. Look few are seen in video sitting above," he wrote. "This tigress was rescued safely from a well & then released in wild. Such work involves so many things."

Yes it is from Bandhavgarh tiger reserve it was rescued on 15 Jan 2021 night .tigress fall in the well of a villager in village patour of BTR. Rescue team rescued from the well and early morning release it in core of patour range of BTR. pic.twitter.com/7YxMcgrCod

Bandhavgarh National Park veterinarian, Dr Nitin Gupta, further revealed on Twitter that the tigress had fallen into a villager's well in the village of Pataur. It was rescued from the well on January 15 and released back into the wild.

This is not the first time that a video of a wild animal 'smoking' has created waves on social media. In 2018, a video of an elephant 'smoking' in Karnataka had gone viral online. The astonishing video showed an elephant picking up something from the burnt forest floor and 'smoking' it. The incident took place in Karnataka's Nagarahole National Park.