Watch: Karnataka Elephant Filmed 'Smoking'. What It Was Actually Doing

This is probably the first-ever visual documentation of this phenomenon 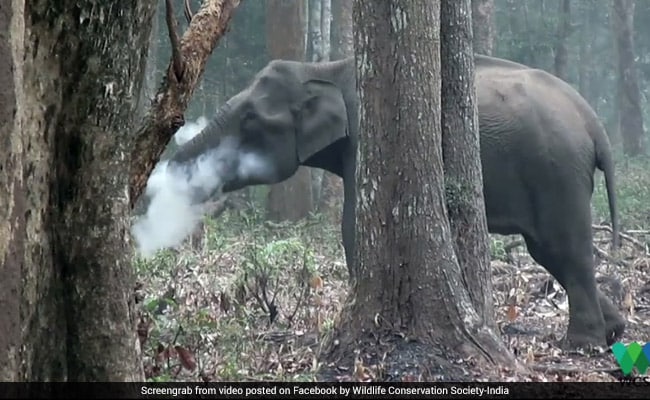 The elephant appeared to be smoking in the video.

The astonishing video shows an elephant picking up something from the burnt forest floor and 'smoking' it. The incident took place in Karnataka's Nagarahole National Park.

In a statement to NDTV, Mr Kumar said that the female elephant in the video was around 30 to 35-years-old.

Watch the perplexing video below:


For those wondering what is actually going on in the video, Dr Varun Goswami, WCS India scientist and elephant biologist, explains: "The elephant was trying to ingest wood charcoal. She appeared to be picking up something from the burnt forest floor, blowing away the ash that came along with it in her trunk, and consuming the rest."

According to Mr Goswami, charcoal may not have any nutritional value, but wild animals are often attracted to it for its "medicinal properties". It also serves as a laxative, which again attracts wild animals to it after 'forest fires, lightning strikes, or controlled burns of this type', he says in WCS's Facebook post.

Promoted
Listen to the latest songs, only on JioSaavn.com
Though such behaviour has been reported before, Mr Kumar tells NDTV that this is, as far as he knows, the first time that there has been any visual documentation of it.