Read inOther Languages
This Article is From Nov 07, 2019

Is This Plane Really Flying Inside A Rainbow? Here Is What's Happening

The video shows a plane inside a full circle rainbow 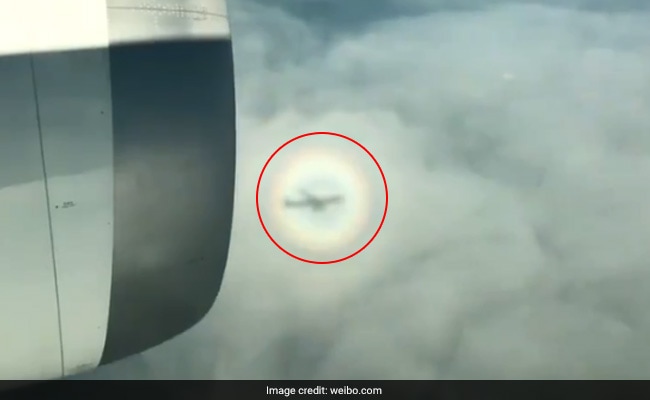 A viral video appears to show an aircraft inside a full circle rainbow.

An incredible video shared by a Chinese blogger appears to show an airplane flying inside a full circle rainbow. The footage was captured from a plane window by a passenger during a domestic flight in China. In the video, a small aircraft moves along with the colourful ring while staying inside it the whole time.

The footage was shared to Chinese social media platform Weibo by a popular aviation blogger three days ago, where it has gone viral. Many have commented to call the footage "pretty", while some have asked if it is actually a UFO. Watch the video below:

So what is happening in the stunning video? Is the plane actually flying inside a rainbow?

Well, according to Daily Mail, the whole thing is just an optical illusion. The 'plane' inside the rainbow is actually a reflection of the plane that the passenger was sitting inside, they explain.

The image was formed after a ray of light shone through the plane which the passenger was on, and got reflected and bent by ice crystals, meteorological engineer Bian Yun explained to Daily Mail.

Mr Yun added that this phenomenon is not uncommon and occurs often, especially when clouds are thick. Many people don't look carefully when they look out of the plane window," he said. "As long as the angle of the light is right, the observer's position is ideal and the clouds are thick and smooth, they will be able to see the phenomenon."