Is India Prepared For A Zombie Apocalypse? RTI Asking This Goes Viral 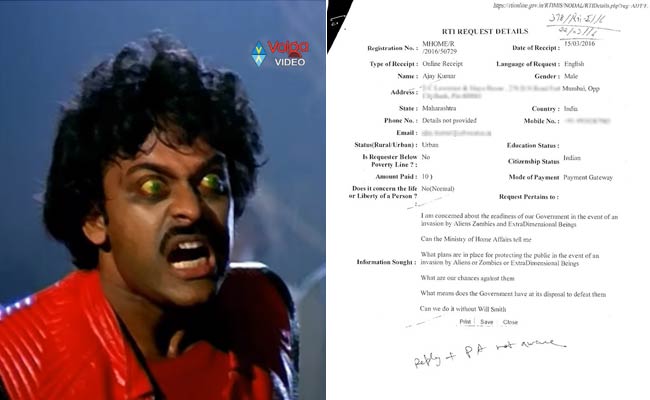 The RTI received an answer too. (Photo Credit: YouTube/Twitter)

One too many episodes of Walking Dead, too much time on hand, a desperate need for a good joke or just a weird desire to know - we're not sure what exactly brought this on but a Mumbai resident filed an actual Right to Information or RTI application to check the Indian government's preparedness in the case of a zombie apocalypse and/or alien invasion.

The RTI, filed earlier this year on March 15, made its way online in June but only recently went viral on social media.

In his application, Mumbai resident Ajay Kumar said: "I am concerned about the readiness of our Government in the event of an invasion by Aliens Zombies and Extra Dimensional Beings."

He also asked if the government would be able to defeat or dispose of the entities without the help of Hollywood actor Will Smith.

Abhimanyu Ghoshal, a Bengaluru-based reporter, tweeted a copy of the RTI:

Dude files RTI request about whether Indian govt. can handle a zombie outbreak. Included my favourite part of request. pic.twitter.com/BVty8FIPQH

Promoted
Listen to the latest songs, only on JioSaavn.com
The RTI received an answer, just not the one Mr Kumar was hoping for.

@aghoshal Here's the response. Not an unreasonable query. US CDC had zombie scenario for emergency preps:https://t.co/LVkUP7ave1pic.twitter.com/0FaOuGPka9

Yep, no answer on whether Will Smith has been recruited to deal with this 'hypothetical situation.' Could this have been the real reason behind the Men In Black actor's visit to Mumbai last month?

No one knows what's really going to happen but we suggest Mr Kumar make his peace with this Twitter user's comment on the matter.