"My palms got sweaty just watching her inch down," wrote one person. 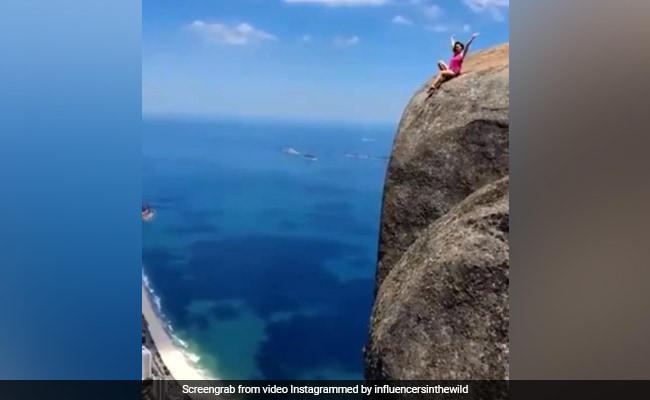 A video of a tourist posing on the edge of a mountain has horrified many.

If you are afraid of heights, this is the kind of video that will make your feet tingle. The footage, which has gone crazy viral online, shows a tourist posing on the edge of a 3,000-foot mountain near Rio de Janeiro. Behind her is a clear blue sea. Below her - much, much below her - a city spreads out and pans into view as the woman inches closer to the edge and lifts her arms in celebration.

A 15-second video clip of the reckless stunt hit Twitter on Sunday, where it has since collected 13 million views and hundreds of critical comments.

The footage shows the unnamed tourist, clad in a bright pink top, posing at the edge of a 2,769-foot cliff on Pedra da Gavea, Brazil. After being shared on Twitter, it was reposted on Instagram by a popular account '@influencersinthewild' that is dedicated to documenting all the reckless, bizarre things that influencers do for social media currency and viral fame.

Take a look at the viral video below:

The short clip has quickly garnered many comments slamming the stunt:

That makes the bottoms of my feet tickle -- like I was about to slip and fall. I agree. No way.

Just looking at that feels like the bottoms of my feet are being stabbed with knives!

My palms got sweaty just watching her inch down

Some people, however, shared pictures of themselves at the same spot:

It's an attraction for visiting hipsters and thrill seekers.
An all-too-common sight. pic.twitter.com/PLfk5fB8Yr

According to tourism website Visit Brazil, Pedra da Gavea is the world's biggest coastline monolith. "Visitors can reach the top of the monolith after a hard and demanding trek of approximately 3 hours... Climbing Pedra da Gavea is only for experienced trekkers," the website warns.