Internet Can't Get Enough Of Cat That Sounds Like It's Saying "Well, Hi"

Over a million views for this hilarious video. 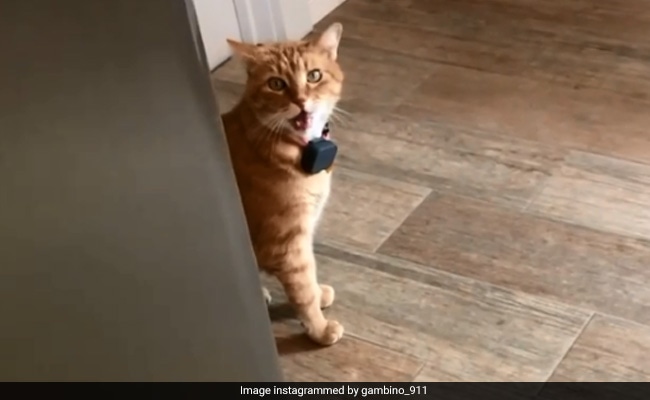 Gambino the cat was filmed saying "Well, hi" in a viral video.

A ginger cat named Gambino has become a celebrity on social media, all thanks to his unusual meow. A home video of Gambino where he appears to be saying "Well, hi", albeit with a thick accent, has gone viral online. The video was shared on Instagram and TikTok by the cat's owner four days ago. Since then, the polite kitty has amassed thousands of fans and followers.

In the video, Gambino is seen running away from another cat and hiding behind a refrigerator. As his owner follows him with a camera, the well-mannered cat surprises him by meowing something that sounds a lot like "Well, hi"- before proceeding to groom himself.

"It sounds like he is saying 'Well Hi!!!' in a thick southern accent!!" wrote Gambino's owner while sharing the video.

Watch the hilariously adorable video below:

On TikTok, the video has gone viral with over 1.4 million views. It has also collected another 6 lakh views on Instagram, along with thousands of comments. Many Instagram users confirmed that they heard the cat's greeting.

"I keep listening to it and yes that's exactly what he said. Well Hi!" another user said. "I'm from South Mississippi and I approve," a third wrote.

According to Fox News, Gambino was a stray cat until December 2014, when he was adopted by his current owner.

My very first picture of Gambino boy! I walked to the back door and there he was just posted up like he already owned the place! My other kitties were not thrilled! We decided to foster him until we could find his previous owners or a new home. We looked for the previous owners for about a month with no luck (we tried posters, Facebook pages, going door to door). Then we decided to find him a new forever home. We thought we found the perfect match but within 24 hours they decided he wasn't a good match for their home. We took him back into our home and they rest is history. He knew right where he belonged.