"It was quite easy, considering we didn't find this to be dangerous," they said while defending the picture 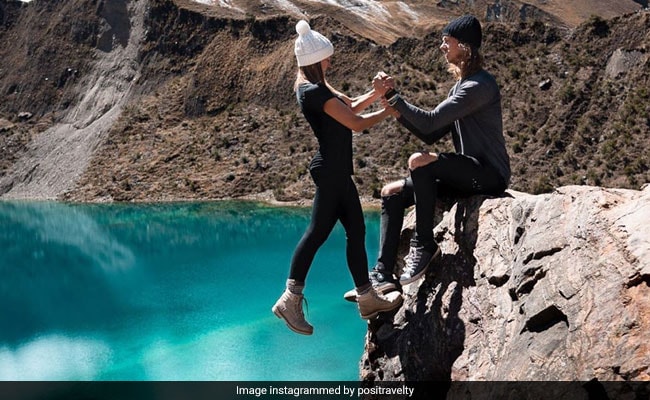 Kelly Castille and Kody Workman have been criticised for sharing a "dangerous" pic.

A couple has been slammed as "reckless" and "attention-seeking" for a picture that shows one dangling the other off a cliff. Kelly Castille and Kody Workman, the couple behind the popular Instagram travel account Positravelty, have come under fire for a photograph they shared last month.

Clicked at Laguna Humantay, a lake in the Peruvian Andes, the picture shows Kody, 32, holding Kelly, 33, as she hangs off a cliff, hundreds of feet above the lake.

"We urge you to take a chance, to push past barriers of negativity and oppression of self fulfillment and paint the picture of who YOU want to be," they wrote while sharing the photograph. "There is a difference between risking your life and taking a risk at having one.

If that caption sounds defensive, it is because Kelly and Kody are no stranger to controversy. They have faced severe criticism for taking dangerous photos in the past as well. In April, a picture they took dangling off the edge of an infinity pool had earned them a lot of backlash.

Take a look at their Laguna Humantay post below:

The world is waiting for you! Behind the masses of those that wish to watch you lead a quiet and sedentary life is an open, unlined canvas. We urge you to take a chance, to push past barriers of negativity and oppression of self fulfillment and paint the picture of who YOU want to be. Never let yourself be beat down for living your life by those too afraid to live their own. There is a difference between risking your life and taking a risk at having one. We know which side we would rather be on, do you?

Since being shared online on August 28, the picture has collected over 1,500 comments.

"It's all about attention seeking. Gives us nothing about the country they are travelling in," wrote one person.

"Why is he always dangling you over the edge?" another asked.

"Just stupid beyond belief that you are doing this to gain attention from people," a third commenter said, while a fourth wrote: "Don't forget to upload pics in your full body cast later too!"

However, the couple defended their photograph and told Insider: "It was quite easy, considering we didn't find this to be dangerous

"As we have discussed before, we love to push our creativity and play with perspectives. It is not dangerous. We would never risk our lives."