Injured Flamingo Rescued In Delhi, Released Into Wild After Treatment

The Greater Flamingo was spotted with critical wing injury in South Delhi. 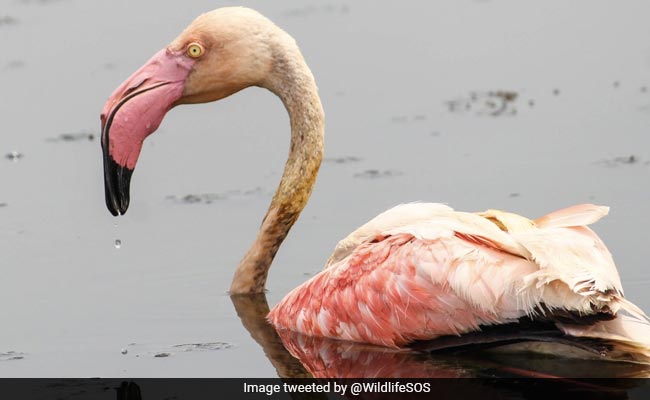 A greater flamingo was found injured in South Delhi.

A critically injured Greater Flamingo was treated and released into the wild safely at the end of a joint operation led by the Delhi Zoo and Wildlife SOS on May 18.

A 2.5 years old Greater Flamingo (Phoenicopterus roseus) was spotted with critical wing injury in South Delhi two weeks ago and was brought to the Delhi Zoo for treatment. After complete recovery, the bird was returned to its natural habitat and integrated with a resident flock of flamingos at the Najafgarh wetlands.

Dr Suneesh Buxy, Director, Delhi Zoo observed, "Vet team NZP has done a good job with team spirit, providing treatment to the 2.5 years old Greater Flamingo. It's a pleasure to see that the isolated bird was reunited with its family and set free in its natural habitat. More zoos must make sincere efforts to return wildlife to their habitat, as part of their contribution towards conservation."

Dr Vikas Jayswal, Veterinary Officer, Delhi Zoo, said, "We monitored the flamingo's treatment and medical progress to expedite recovery so it could be returned to the wild soon after getting declared fit."

The bird was returned to its natural habitat and integrated with a resident flock of flamingos at the Najafgarh wetlands with the assistance of ornithological body DelhiBird Foundation, thus setting a new precedence in ensuring conservation of biodiversity! pic.twitter.com/fBINOAFDXZ

Generally, the parents feed the Flamingos till they are three years old, "but this bird is old enough to be integrated with a non-natal flock," according to Kartik Satyanarayan, CEO, Wildlife SOS.

Satyanarayan continued, "We wanted the bird successfully released in the wild. Delhi Bird Foundation (DBF) members came to our aid and helped us identify the resident flock of flamingos in Najafgarh Wetlands. This was a challenging situation as the only way to successfully release the bird was by using a boat. I appreciate the contribution of Delhi Zoo Director and Veterinary team in returning the flamingo to its natural habitat."

The first option was to integrate the bird back in Okhla where Flamingos are often spotted but the resident flock could not be spotted there.

A resident flock of flamingos was identified at Najafgarh Jheel Wetlands by DBF members.

Since the flamingo flock was over 1 km from the bank in the wetlands with no road access, a boat was arranged in an effort to transport the flamingo closer to the flock. When the team was a couple of hundred meters from the resident flock, the flamingo was released! pic.twitter.com/04yyJqkdpi

"Since the flamingo flock was over one kilometre from the bank in the wetlands, there was no road access. Therefore, we arranged a boat to transport the flamingo closer to the flock. When we were two hundred meters from the resident flock, the flamingo was released," DBF members, Sandeep and Nidhi Gupta said.

Greater flamingos are the largest and most widespread species of the flamingo family. They live in flocks, called colonies, to protect individuals from predators.