"The Headquarters of 'Work From Home Fashion' is now India," wrote Anand Mahindra. 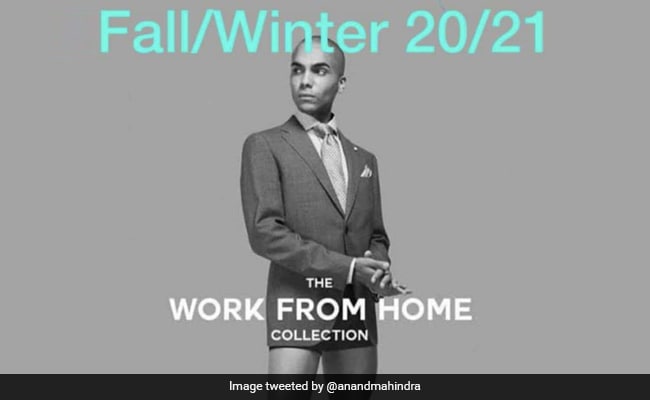 The coronavirus pandemic has introduced a new normal to the world where millions of people are working from the comfort of their homes to contain the spread of the highly infectious disease. Of course, the new WFH system comes with a 'pants optional' dress code, given that nobody can see much in meetings conducted over video conferencing platforms.

On Thursday, Anand Mahindra, Chairman of Mahindra Group, shared a spoof magazine cover on Twitter which shows a man dressed in a formal blazer with no pants. "Sorry, but you can throw this cover in the trash can," he wrote, adding that Indians win the game of 'work from home' fashion with lungis worn below jackets - which, according to him, make for comfortable WFH attire.

"The Headquarters of 'Work From Home Fashion' is now India. Nothing beats a Lungi below a jacket," Mr Mahindra wrote. " Far more stylish & far less awkward in case you stand up accidentally...!" he added.

Sorry, but you can throw this cover in the trash can. The Headquarters of ‘Work From Home Fashion' is now India. Nothing beats a Lungi below a jacket. Far more stylish & far less awkward in case you stand up accidentally...! pic.twitter.com/t6gSD81YtT

The tweet has collected over 6,000 'likes' and a ton of amused comments on the microblogging platform.

Anand Mahindra has earlier confessed to wearing lungis under formal shirts while working from home. "I have a confession to make: On some video calls from home, I DID wear a lungi under my shirt. Didn't have to stand up at any point during the meetings, but I suspect my colleagues may ask me to do so after this tweet!" he wrote back in April.