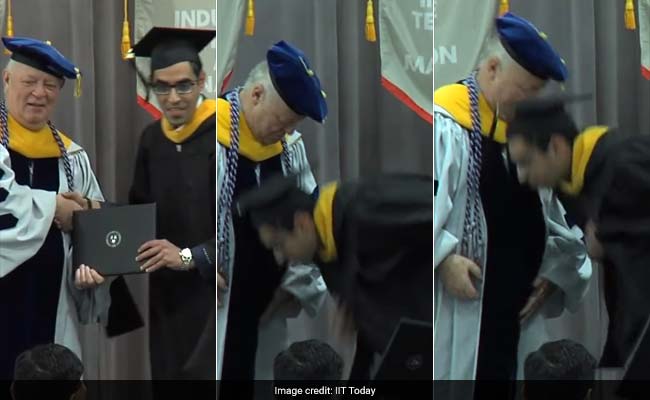 An Indian student left his American dean surprised as he bowed down to touch his feet.

Perhaps that's why a video of an Indian student touching his dean's feet at his graduation ceremony has gone viral on social media.

During the Commencement Ceremony at the Illinois Institute of Technology, Chicago, US, an Indian student, Gaurav Jhaveri, bowed down to touch his dean's feet after receiving his graduation degree. Watch the video below:


Promoted
Listen to the latest songs, only on JioSaavn.com
Touching someone's feet is an Indian mark of respect. And while it is common to see that in our country, it definitely left the dean baffled. His expression says it all.

Indians will be Indians.... pic.twitter.com/YVR94DzW2l

Of course, Indians on Twitter have come out in full force to crack jokes. While some made the much-expected Alok Nath references:

Others couldn't get over the surprised expression on the dean's face:

@pannu_hardeep@Trollacharya Nothing bad, but see the look on dean's face. He thought it was something with his feet.

Some even took it upon themselves to explain what happened:

@Trollacharya@priyansh2106 The professor didn't realize what has happened ?This guy touched his feet with a very good intention as a Guru, pic.twitter.com/lzcXEiK6A7

And this guy summed it up nicely:

Let us know what you think of the video using the comments section below.Click for more trending news