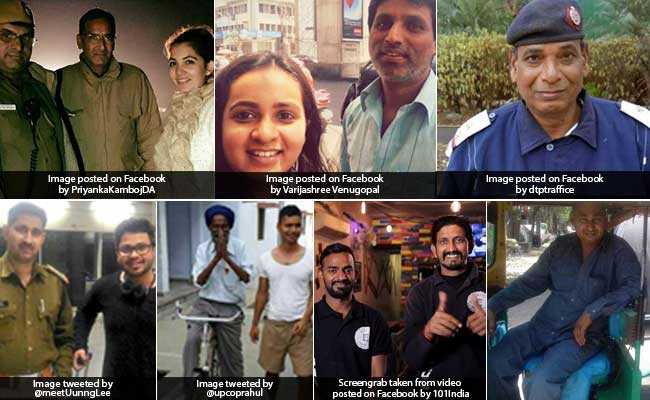 As India celebrates 70 years of Independence, it's time to celebrate some wonderful things done by the people of this country. So, this Independence Day, here are seven amazing stories about people performing random acts of kindness that have gone viral in the recent past. From policemen going beyond the call of duty in order to help people to others offering a helping hand to those who need it, here are some brilliant viral stories that prove that not all superheroes wear capes.

1. When Delhi cops helped a woman stranded on the road past midnight
New Delhi resident Priyanka Kamboj shared her experience of being stranded past midnight with a flat tyre when two police officers reached out to her. They not only helped change the flat on her car but also ensured that she reached home safely. She had shared a Facebook post on February 2, thanking the officers who helped her. Her post subsequently went viral.

2. When an auto driver in Hyderabad saved the day by helping his passenger who ran short of cash
Using hashtags like "#randomactofkindness" and "#lifechangingmoment", Facebook user
Varijashree Venugopal wrote about her kindhearted auto driver in a viral post on April 11. Ms Venugopal needed Rs 5000 before a visa interview and was running short by a couple thousand bucks. After trying several ATMs in vain, her auto driver, Baba, saved the day by offering her the extra cash she needed. "He selflessly helped a total stranger. I was moved," she wrote in her viral Facebook post.

3. How a Delhi cop won social media by returning a man's wallet with Rs 50,000 intact
New Delhi resident Jagpreet Singh described in a Facebook post how Sub Inspector Madan Singh found and returned his wallet without a rupee of the Rs 50,000 he had in it missing. "Remember, we've good people in police and they will always help us," he said in his post shared on January 8.

4. The CISF Officer who won over Twitter for helping out a passenger who lost his luggage
In a tweet posted on February 19, blogger Anubhav K. Sharma explained how Inspector Sunil Kumar went out of his way to help him moments before he was about to get off duty. The Central Industrial Security Force (CISF) officer helped Mr Sharma find his missing luggage at the Indira Gandhi International Airport, telling him - 'Ye to duty hai meri'. Mr Sharma tweeted about his experience thanking the officer for his help and put a smile on many tweeple's faces.

Promoted
Listen to the latest songs, only on JioSaavn.com
6. When police recruits in Uttar Pradesh pitched in to buy a hawker a bicycle after it was stolen
This heartwarming story made tweeple smile from ear to ear after it was posted on Twitter on March 31. Rahul Srivastav, the Public Relations Officer to the Director General of Police, Uttar Pradesh, tweeted that after a hawker's bicycle was stolen, recruit constables at Moradabad's Dr BR Ambedkar Police Academy gifted the elderly man a new one. "Great to see new recruits with golden heart, soon Indian society will be gifted by these great cops on ground to serve them," a Twitter user commented on the tweet.

7. This cafe run entirely by the differently-abled
A video about a Delhi cafe, run by the differently-abled, went viral after it was posted on February 15. Echoes Cafe, in south Delhi's posh Satyaniketan neighbourhood is brilliantly managed and run by people who are hearing and speech impaired. The video touched a chord with many on Facebook.Click for more trending news