The king cobra is the world's longest venomous snake. 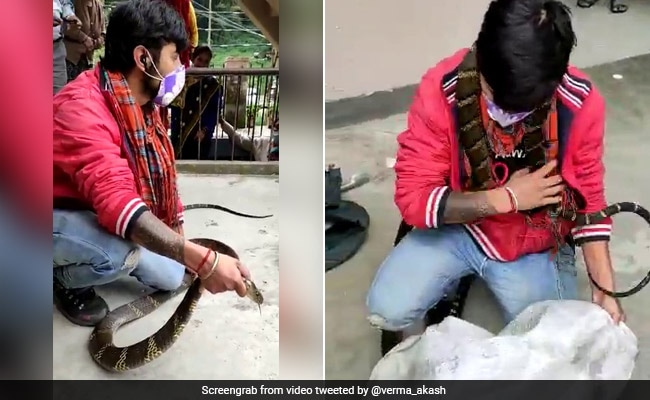 A huge king cobra was captured in Nainital.

If snakes and other reptiles make you shudder, you may want to consider skipping this video which shows a huge king cobra being captured from a house in Uttarakhand. The video shows the venomous snake being captured from a house in Nainital by the Forest Department's Rapid Response Team. The sheer size of the reptile, coupled by the fact that it was found hiding under a table, makes this video a terrifying watch.

The clip was shared on Twitter by Indian Forest Services officer Akash Kumar Verma, who credited it to DFO Nainital. It shows a snake rescuer reaching under a table to catch the king cobra and, having captured it successfully, taking it to the rooftop area of the house. As curious bystanders watch, the rescuer was placing the serpent in a sack. At one point, the snake even began wrapping itself around his neck, eliciting shocked gasps from the audience.

Since being posted online, the video has collected over 3,500 views and a ton of amazed comments.

"A big salute to the brave, courageous and dedicated team," another said.

Mr Verma also posted an update about the king cobra. He revealed that it was released into its natural habitat, sharing a video which shows the snake slithering away after being released from the sack.

The king cobra is the world's longest venomous snake, endemic to the forests of India and Southeast Asia. Last year in November, a 10-foot king cobra was removed from a train in Uttarakhand.

Caught On Camera: The Strange And Spectacular Phenomenon Of Reverse Waterfalls