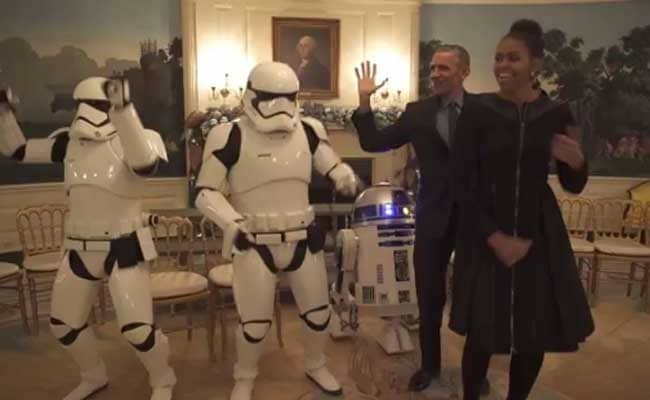 Was the fourth with you on May 4? It most definitely was in the White House and at Facebook HQ. As fans across the globe celebrated the official 'Star Wars Day,' the hashtag #MayThe4BeWithYou was tweeted more than a million times, including the President of The United States.

The Obamas, never shy about getting jiggy with it, dance to Uptown Funk in a video tweeted by The White House's official account. Their dance partners - R2D2 and two Stormtroopers.

Dancing alongside Barack Obama, FLOTUS says Uptown Funk, by Mark Ronson and Bruno Mars, is her favourite song. Now, how did R2D2 know? This cute dance party was released with the caption: "Dance. Or dance not. There is no try. #MayThe4thBeWithYou"

Dance. Or dance not. There is no try. #MayThe4thBeWithYouhttps://t.co/9g1JUHV1n5

On the West Coast, Facebook chief and Star Wars super-fan Mark Zuckerberg brought a little bit of the galaxy far, far away to Menlo Park, the social network's headquarters in California.

Zuckerberg's 'team meeting' with Chewbacca, a Stormtrooper, two Ewoks and a rebel soldier has been shared over 15,000 times since he posted the photo on Wednesday.