Blue-ringed octopuses have a paralysing venom that can cause the respiratory system to shut down within minutes. Currently, no anti-venom exists. 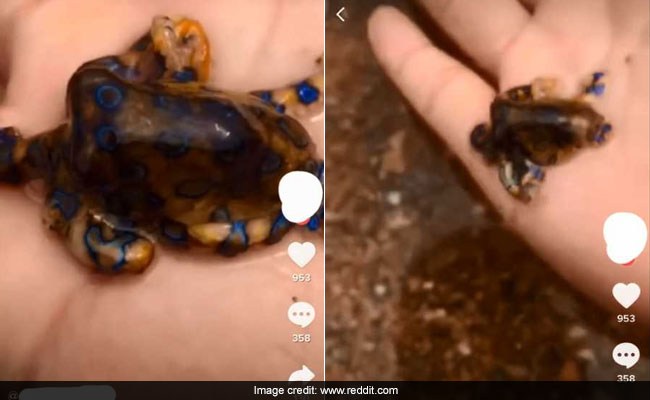 A video of a tourist handling a blue-ringed octopus has shocked netizens.

A video of a tourist handling a highly venomous blue-ringed octopus with bare hands has shocked the Internet. The clip, uploaded on Reddit, shows an unsuspecting beachgoer holding a blue-ringed octopus for a few seconds before putting it back in water. According to research, blue-ringed octopuses have a paralysing venom that can cause the respiratory system to shut down within minutes. Currently, no anti-venom exists.

According to Fox News, the video of the tourist was shot in Australia and uploaded to Tik Tok first, from where it went viral. The video was captioned "what a pretty octopus" in Mandarin.

On Reddit, the tourist has been slammed as "monumentally stupid" and "lucky to be alive."

Since being shared online on Monday, the video has collected over 20,000 'upvotes' and more than 2,000 horrified comments.

"Do they even know how lucky they are to be alive after doing something that monumentally stupid??" wrote one person in the comments section.

"I am usually pretty calm, but this actually made my heart race... It's like holding death in your hand!" said another.

"The only cure for blue ringed octopus venom is literally to do artificial respiration and keep the heart beating until the body metabolizes the venom," a third explained.

Blue-ringed octopuses generally do not attack unless provoked, marine ecology expert Michael Keough explained to Stuff.com. "If you see an octopus with bright blue rings, enjoy it but don't touch it," he added.