Here Is Why Chicago Is Setting Its Train Tracks On Fire

A brutal cold wave has hit the American Midwest, bringing temperatures lower than those in Antarctica. 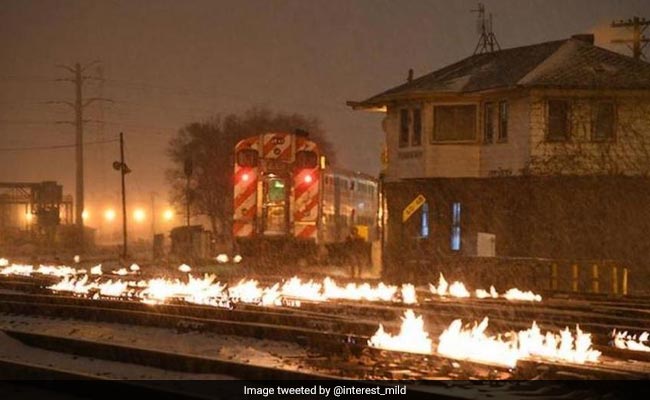 Images of train tracks on fire in Chicago have gone viral on social media recently. However, they have been set on fire for a very good reason - to combat the freezing temperatures and keep them operational.

A brutal cold wave has hit the American Midwest, bringing temperatures lower than those in Antarctica. According to Chicago Tribune, in such extreme weather, transport operator Metra uses fire to keep switches working and help with track repairs.

Extreme cold weather can cause steel to contract, causing breaks on train tracks, said Metra spokeswoman Meg Thomas-Reile to Chicago Tribune. While Metra uses continuously welded rail on most of the system, there are some locations near switches and some crossings where the rail is bolted together. These areas are most vulnerable to separating in frigid temperatures.

To repair the breaks, Metra heats the tracks with a rope soaked in kerosene that is laid along the base of the rail and lit on fire. The fire heats up the rail and once it expands, workers pull the rails back together and rebolt them or weld them.

The whole process has made for some mesmerising pictures and videos that have gone viral on social media.

I'm just gonna show ppl this video whenever anyone asks me how cold it gets in Chicago https://t.co/HKS6k8a1n0

Chicago putting RAILSon FIRE
It's that cold out there ☃ #chicago#omnidigit#train#fire@omnidigitpic.twitter.com/vKLI2vuyDL

Chicago is so cold right now that they have to literally set railroad tracks on fire to warm them up so they don't crack or cause trains to crash, and so they can do repairs. pic.twitter.com/R5Br9Cj26g

It's so cold in Chicago they set our commuter train tracks on fire to warm them pic.twitter.com/FT2erQ6pHT

CNN reports that Metra says it's safe to run the trains over the flames because the diesel fuel in the trains "combusts only with pressure and heat, not open flames."